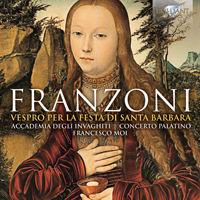 The scene is Mantua in Lombardy, Italy. The Duke of Mantua – himself a composer and eager to become a patron of the arts ¬– establishes a Basilica in the city. Freed from the auspices of Rome and with its own bespoke liturgy, the Basilica became the focus of a thriving musical environment. It was at this point that Franzoni, Maestro di Cappella at the Basilica, was commissioned to write the Vespro per la Festa di Santa Barbara for the grandest ceremony of the year, celebrating the life of the martyr to whom the Basilica was dedicated.

Taking inspiration from his surroundings and the Basilica itself, where the piece was to be performed, Franzoni wrote suitably grandiose music for the occasion. Employing the use of highly skilled trumpet and cornet players, and writing intricate passages of complexity for the large chorus available to him, Franzoni worked closely with the acoustics of the venue by carefully placing musicians around the space. The occasion also required novel use of instruments; solo passages are interspersed with vocal passages, and instruments double vocal lines – practices born out of necessity that would soon become commonplace.

The work is performed by leading period ensembles; the Accademia degli Invaghiti – named after the original 16th-century Mantuan group – is joined by period cornetto and trombone ensemble Concerto Palatino, led by Bruce Dickey and Charles Toet. Supported by the Cappella S. Barbara, together they draw on their in-depth knowledge of Franzoni's work to authentically position the performers and produce the sense of occasion Franzoni intended.

The court of the Gonzaga family in Mantua occupies an unique and distinguished position in 16th and 17th century Italy both for the quality and quantity of musical activity associated with it and its palatine basilica of Santa Barbara. With the construction of Santa Barbara, Duke Guglielmo Gonzaga succeeded in endowing the city with a monumental palatine basilica and its own autonomous liturgy. Equally important was the formation of the cappella musicale: Guglielmo recruited the finest vocalists and instrumentalists available and promoted the composition of cyclical masses, magnificats, and motets based on melodies drawn from the liturgy of the palatine basilica.
The present recording project focuses on the music of Amante Franzoni (1575-1630), Maestro di Cappella of the St Barbara Basilica. His Vespers for Santa Barbara include 4-, 5- and 6-part, as well as polychoral Psalms. Short instrumental interludes are included between the choral works.