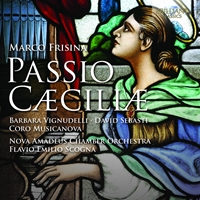 After studying composition at the Conservatory Santa Cecilia in Rome, Marco Frisina enrolled at a theological college, and was ordained as a priest in 1982. He carries out his ministry in Rome, where he founded and directs the Choir of the Diocese of Rome, which he recently took on tour to the USA. In addition to his sacred vocal works, Frisina has also composed scores for several religious-themed films. The Passio Caeciliae describes the martyrdom of Caecilia, a maiden of noble descent in the 2nd century, a creature of light, love, faith and innocence, who is put to death in her own home. The Passio is a tableau of nine scenes from her life, from her conversion to Christianity to her ultimate love song for Christ, before dying as a martyr.

Characteristics of Frisina’s work can be found in the lush harmonisation of the choral movement ‘Psalm 45’, which is undoubtedly a highlight of the recording, and acclaimed Italian soprano Barbara Vignudelli sings the protagonist role, with David Scogna narrating. Organist Lorenzo Macrì, Coro Musicanova and the Nova Amadeus Chamber Orchestra are conducted by Flavio Emilio Scogna.

Other information:
- New recording (17 March 2012 Cripta delle Ancelle della Carità, Rome) by Italian soloists, choir and chamber orchestra, conducted by Flavio Emilio Scogna.
- Italian composer Marco Frisina (b.1954) sets this tale in a moving and appealing musical language, in the great Italian choral tradition, reaching back as far as Palestrina.
- Contains a libretto as well as English and Italian notes on the music.
More Less