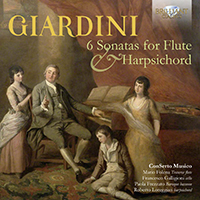 New to the catalogue, delightful chamber music by an Italian celebrity of 18th-century London.
Almost completely unknown now, the six Sonatas for transverse flute and basso continuo by Felice Giardini (1716-1796), published in London late in 1751, were the first works of their kind to appear in print by a composer working in England. Giardini had taken London by storm with the brilliance of his violin playing, and his success there seemed assured. They were also the first sonatas published for obbligato harpsichord and violin, as opposed to violin ‘solos’ with a basso continuo. In practice, the solo part was often taken by a flute, as we find on this superb new, historically informed recording.
Born in Turin, Giardini studied violin with the notable soloist and pedagogue Somis. He moved to Rome and then Naples, and by 1748 had become sufficiently renowned to seek his fortune on an international tour. When he arrived in London in 1750, however, he attracted immediate attention in aristocratic circles, and became a music master for figures including the Prince of Wales, as well as leading the orchestra of the King’s Theatre in London. He conducted the Three Choirs Festival in London between 1770 and 1776 before taking long tours of Italy and Spain. One last tour to Russia proved too much, and he died in Moscow in 1796.
The contemporary reputation of Giardini’s Op.3 is indicated by the fact that it was reprinted on the Continent, at a time when relatively few English musical publications found their way into foreign catalogues. Giardini's sonatas are significant as a harbinger of the Classical concertante sonatas by Beethoven and his contemporaries, in that they work with a truly dualistic approach to the instruments. The instrumentation and the ornamental and elaborate treatment of the solo part recalls the Baroque-era continuo sonata. The two-movement sequence, bipartite form, and a flair for idiomatic writing reflect the influence of the popular Italian keyboard sonata. The basic principle of cooperative opposition in a homophonic context that underlies the entire set most resembles the concerto.

Felice Giardini was born in Turin. He began to study music as a child, soon becoming a chorister at the Cathedral in Milan while specializing in harpsichord and composition. On his return to Turin, he pursued his studies of the violin under Giovanni Battista Somis, and in 1736 found employment as a violinist in the orchestras in Naples and Rome.
In 1748 he set out on a concert tour, performing as a soloist in Europe’s foremost music centers. In spring 1750 he reached London, where his playing immediately attracted widespread attention in court and aristocratic circles and he performed in numerous important concerts, while acting as music master to eminent figures such as the Dukes of Gloucester and Cumberland, and indeed the Prince of Wales.
By 1752 he was leading the orchestra of the Italian Opera at the King’s Theatre. He established himself as one of the most important musical figures of his time, both as a performer and as a impresario. In 1793, at the age of 77, he made his way to Russia, first to St. Petersburg and then to Moscow, where he died on 8 June 1796.
Giardini was a significant representative of the Piedmontese violin school of the period. Today he is largely remembered for his many instrumental works and for his contribution to the evolution of the quartet.
The title page of the Op.3 Sonatas suggests that they were originally intended for just two instruments (harpsichord and violin or flute), whereas in fact they are trio sonatas, with numbered sections devoted to the basso continuo. In the present recording the musicians double the left hand of the harpsichord with the cello or bassoon. This makes for greater variety of timbre, and increases the expressive impact of subtle changes of mood. The music is by turns charming and joyous and introspective and melancholy, characteristic of the Empfindsame Stil of the time.
Excellent performances on period instruments by Mario Folena (flute), Francesco Galligioni (cello) and Roberto Loreggian (harpsichord).

Praise for Mario Folena on Brilliant Classics:
Vivaldi Flute Sonatas, 93703: 'Mario Folena… is a very fine flautist, with imagination and flexibility. His intonation is right on, and the tone he produces is huge and round... warmly recommended.' Fanfare
Vivaldi Flute Concertos, 95047: 'This is the only recording available of the six concertos of Op. 10 on period instruments and would be self-recommending even if it were not quite as good as it is. As it is, however, it is very good indeed and can be recommended.' Fanfare
More Less