Granados: Goyescas, an Opera for Piano 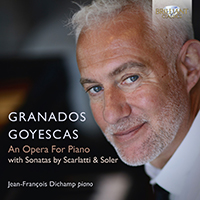 A unique coupling on record: a Romantic piano masterpiece with sonatas from the time of the paintings by Goya that fired the imagination of Granados to compose Goyescas.

In his booklet essay, Jean-François Dichamp explains that he experienced an epiphany with Goyescas: while Granados himself later reworked his piano cycle into an opera, first premiered to acclaim at the Metropolitan Opera House, just a couple of months before the composer’s untimely death by drowning, the pianist sees the piano cycle as a through-written dramatic work in its own right: an opera for piano. He plays it accordingly, with tremendous fire and awareness of the voices which may be heard in pieces such as ‘The Maiden and the Nightingale’.

This is the lyric heart of a cycle which opens with the courtly insinuations of ‘Galant Compliments’ and soon progresses to a more ardent love duet, ‘Conversation at the Window’. Finally, as so often in Spanish music, death has the last word, and the cycle closes with the Serenade to a Ghost: comical yet chilling, unnerving and quintessentially Spanish.

Between each section of the Goyescas, like intermezzi at the opera, Dichamp places a Baroque keyboard sonata, by Scarlatti and Soler. This is the music that would have accompanied aristocratic evenings for the nobles who were immortalised – not always in complimentary terms – by Goya. These are the paintings that changed the course of Granados’s career when he first saw them as a young man in the Prado museum in Madrid, and determined that one day he would pay homeage to Goya’s muse in music.

Jean-François Dichamp graduated from the Paris Conservatoire and became a pupil of Nikita Magaloff. His recordings have long attracted critical praise: ‘A pianist of great delicacy, subtle and elegant’ (Le Monde de la Musique); ‘his Chopin is at once thorough and profound’ (Diapason).

In his piano suite Goyescas Spanish composer Enrique Granados was inspired by paintings by Goya, each painting telling its own story, and together forming one continuous tale, an fictional opera (in fact he wrote this actual opera with the title Goyescas, rarely performed nowadays).
The Goyescas are one of Spain’s most important and indeed iconic piano suites (together with the Iberia suite by Albeniz), its full blooded Romanticism is infused with the sounds, rhythms and perfumes of Granados’ native country Spain.
French pianist Jean-François Dichamp intersperses the Goyescas suite with several sonatas by Scarlatti and Soler, works which, though separated some 150 years, share the same Andalusian spirit.
Jean-François Dichamp was a student of Nikita Magaloff and Maria Curcio (a Schnabel student). “A very sensitive artist”(The Times), “A pianist of great delicacy, subtle and elegant” (Le Monde de la Musique), “His Chopin is at once thorough and profound” (Diapason).
More Less