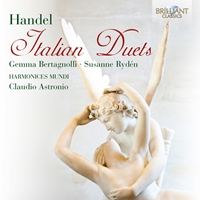 The supreme master of the chamber duet genre was Agostino Steffani, recently celebrated by Cecilia Bartoli, and it is no coincidence that Handel had a manuscript copy of Steffani’s famous duets with him at the beginning of his stay in Rome. The Italian composer’s work was a model for the young musician from Saxony, an inspiration that left tangible traces in those very duets. There is a distinct network of connections between Handel’s duets, his other compositions and those of several of his contemporaries that bears witness to consistent borrowing. The duets are a case in point, revealing a criss-crossing of musical loans from one composition to another. Apart from Steffani, Handel also borrowed musical ideas from colleagues such as Giovanni Maria Clari and Pietro Torri, Dietrich Buxtehude and Antonio Caldara.

The duets continued to charm the world of music even after Handel’s death, when, with the exception of the grand oratorios, the rest of his output faded somewhat into the background. Each duet in this collection is preceded by a compatible instrumental piece, which acts as a sort of prelude. Although these latter compositions were originally written for the keyboard, they were also transcribed for various basso continuo instruments, which is how they are performed here. The practice of alternating instrumental and vocal pieces was typical of court and academy performance during the 1700s, and is well suited to Handel’s duets.

Harmonices Mundi and Claudio Astronio have made fine recordings for Brilliant of several other Baroque composers. Here they are joined by two bright stars of the Baroque opera and vocal scene.