Home > Catalogue > In Spiritum: Music for Cello and Bandoneon

In Spiritum: Music for Cello and Bandoneon 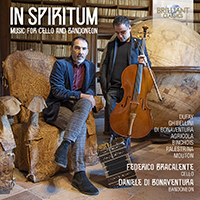 This recording, from friends and collaborators Federico Bracalente and Daniele di Bonaventura, stems from an idea they had almost 10 years ago: to merge the sounds of their respective instruments, the cello and the bandoneon, into a single sound.

After a long period of research and experimentation the artists settled on the polyphonic vocal repertoire of the 15th and 16th centuries to realise their vision, reworking it through the inclusion of free and improvised parts.

The practice of improvising pieces to alternate with other writings was commonplace during this musical period. Tinctoris in ‘Liber de arte contrapuncti’ describes the custom of Cantare super librum - the ability of the performers to elaborate a counterpoint to the mind. Taking advantage of the vocal characteristics of the two instruments – the extensive range and singing likeness of the cello and the two liturgical registers of the bandoneon (left hand and right hand) – the artists perform this music as if they are three singers, inserting it into a new tonal instrumental framework.

In two pieces, Bracalente and di Bonaventura use an overdubbing technique to enable the cello to simultaneously perform the parts of Superius and Bassus (in Alexander Agricola’s De tous biens plaine II) and create a polyphonically more complex fabric in Jean Mouton's 8-voice motet Nesciens Mater.

In addition to the compositions by Agricola, Du Fay, Palestrina, Mouton and Binchois,
they also include an unpublished and never-recorded madrigal, ‘Tu Dormi et Amor veglia per mio danno’, by fellow countryman Eliseo Ghibellini, as well as two other original contemporary compositions written in polyphonic style by di Bonaventura.


Other information:
· Recorded during October 2020 in the Church of San Sebastiano, Falerone, Italy
· The booklet contains notes in English from musicologist Emiliano Finucci, and a note from the artists on the background to this project

· IN SPIRITUM is a project born from the friendship and collaboration of Federico Bracalente and Daniele di Bonaventura, with the idea of merging the sounds of their instruments, the cello and the bandoneon, into a single sound organism.
· The repertoire is chosen from three-voice polyphonic vocal literature, both sacred and profane, with the idea of re-elaborating it through the insertion of free and improvised parts. Already at the time, there was a practice of improvising pieces to alternate with other written pieces. Tinctoris in the 'Liber de arte contrapuncti' describes the custom of Cantare super librum, i.e. the ability of performers to elaborate a counterpoint in their minds.
· Taking advantage of the vocal characteristics of the two instruments, the wide range of the cello and the two liturgical registers of the bandoneon (left hand and right hand), the music sounds as if there were three singers, placing it in a new instrumental timbral context.
· Presented are works by Mouton, Dufay, Agricola, Binchois, Palestrina and works by bandoneonist Daniele di Bonaventura.
· The booklet contains extensive liner notes by the artists.
More Less