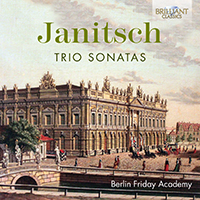 New recordings of elegantly crafted chamber music by one of the leading musical lights of Berlin during the mid-18th century.

A contemporary biographical sketch of Johann Gottlieb Janitsch (1708–ca 1763) presented him as ‘cheerful and unpretentious’, which captures these five trio sonatas in a nutshell. Without emulating the contrapuntal sophistication of Bach’s works in the same medium, or the extrovert cosmopolitan spirit of Handel’s chamber music for his English patrons, Janitsch’s music offers pleasures of its own.

Recognisably drawing on the trio sonata tradition handed down by Corelli and north-Italian contemporaries, the five pieces recorded here reveal subtle distinctions in sound, scoring, and individual musical ideas that would have been appreciated by members of the ‘academy’ which met every Friday at Janitsch’s home in the Prussian town of Rheinsburg during the late 1730s, and thereafter in Berlin, where the composer moved in service to Frederick the Great in 1740.

Janitsch played the double bass, cello and keyboard instruments, and his practical experience lends the basso continuo parts of these trio sonatas a discreet individuality, while the two upper lines are shared between oboe, flute, violin and viola. Very much within the character of Frederick’s court, the expressive key signature of the sonatas is a lively seriousness distinct from the carefree gaiety of, say, Telemann’s Tafelmusik collection. Janitsch’s music is some of the most creative work from the 18th century, with rich melodies and harmonies that reflect the unbridled optimism of the Enlightenment. These works are not only a great joy to play, but are superb to listen to and engage with.

The members of the modern-day ‘Friday Academy’, named after Janitsch’s ensemble, are young period-instrument musicians drawn from around the world and based in Berlin, specialising in the Baroque music written and played there. This release marks their debut on Brilliant Classics, and the first volume in a projected Janitsch series, reviving the name of an unjustly forgotten composer.

Johann Gottlieb Janitsch (1708–ca 1763) was one of the leading musical lights of Berlin during the mid-eighteenth-century. The Prussian capital city was then growing rapidly in population and wealth, well on its way to becoming one of Europe’s great cultural centres. Janitsch, then as now, was known primarily for his chamber music, whose style, a special Berlin version of the late Baroque (or early pre-Classical), is often described as galant or empfindsam meaning ‘sensitive’ or ‘expressive’.

Janitsch established an ‘academy’, a musical club that met regularly for rehearsals and occasional concerts. Janitsch’s Friday Academy—named for the day of the week on which it met— involved amateur as well as professional musicians, performing sonatas and concertos as well as Italian arias and cantatas. After Frederick succeeded his father as king in 1740, Janitsch and his Friday Academy moved with him to the court to Berlin.

The Berlin Friday Academy (named after Janitsch!) is a Berlin-based ensemble made up of young players from around the world – a group of passionate, historically-inspired musicians striving to bring about beauty through the performance, recording, and scholarly discussion of eighteenth-century music.