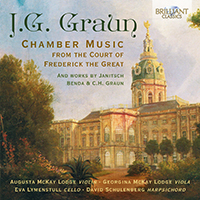 A quartet of four renowned period-instrument musicians with a new and unique collection of trio sonatas from the late Baroque: music fit for a (very discerning) king.
The four composers represented here all worked at the Potsdam court of Frederick the Great, who was himself a flautist and composer of professional ability. The G minor Trio Sonata by Johann Gottlieb Janitsch (1708-c. 1763) and the A major Trio Sonata by Johann Gottlieb Graun (1703-1771) were scored by their composers for two melody instruments and basso continuo (here, cello and harpsichord). Despite the participation of four players, at the time these were described as 'trios’. Likewise designated 'trios’ were the two sonatas by Graun that include an obbligato or written-out keyboard part, which incorporates not only the bass (as usual) but a melody part as well.
All these compositions follow Berlin practice of the time in comprising three movements, of which the first is slow, the second quick, and the last also quick but somewhat lighter and dance-like. Both sonatas are extraordinary even within this exceptional repertory, incorporating lengthy virtuoso passages that resemble the solo episodes of a concerto. The C-minor viola sonata reaches rare heights of expressivity, particularly in its highly chromatic opening movement. The violin sonata in B-flat stands out for the fantasia-like solo passages in both quick movements.
A cello Sonata by the brother of Graun, Carl Heinrich (1703-1759), demonstrates that the younger Graun’s chamber music tends to be more lyrical, less outwardly virtuosic, than his brother's. The king’s favorite instrumentalist was the violinist Franz Benda (1709-1786), a pupil of J.G. Graun. He earned the rare privilege of leading Frederick’s famous private concerts, in which the king played flute alongside a handful of his best musicians.
Winner of the Juilliard School’s Historical Performance concerto competition, the violinist Augusta McKay Lodge is joined here by her sister Georgina and two accomplished colleagues who have also performed with the finest early-music groups on both sides of the Atlantic such as Les Arts Florissants, the Orchestra of the Age of Enlightenment and Tafelmusik. Their stylish performances glow with sympathy, casting the listener back to Frederick’s candlelit salon in the company of the finest classical musicians of the day.

Virtuoso chamber music from the 18th century by four composers: Johann Gottlieb Graun, Johann Gottlieb Janitsch, Carl Heinrich Graun and Franz Benda. They all worked for the Prussian king Frederick The Great, who was himself a flautist and composer of professional ability. Although this music probably was not performed for the king himself, it is preserved in manuscripts associated with one of the musical “academies” that sprang up during and after his reign (1740–86) in the Prussian capital city of Berlin. There the roots of the modern concert tradition could be seen in semi-public gatherings that took place in the homes not only of certain professional musicians but of the city’s elite.
This new recording presents a selection of Sonatas for viola and/or violin and Basso Continuo, written on the boundary between the Baroque and Classical styles. They include some of the earliest chamber music to treat the viola as an equal partner of its sister instrument the violin, demanding considerable virtuosity from the players of both, while expressing a wide range of emotions, both passionate and tender.
Played by violinist Augusta McKay Lodge (“the real thing, a true virtuoso” and “an exceptional violinist” Seen and Heard International), enjoying a flourishing career as an international prize-winning baroque and modern violinist based in New York and Paris, and violist Georgina McKay Lodge, who appeared on viola with European ensembles Les Arts Florissants, Holland Baroque, Camerata Øresund, Orquestra Barroca Casa da Música and the Orchestra of the Age of Enlightenment.
More Less