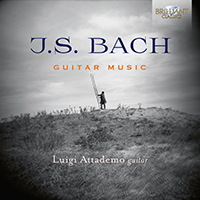 A newly recorded collection of highlights from Bach’s great corpus of instrumental writing, in transcriptions by Luigi Attademo himself.
Bach left us a few isolated pieces and suites for the lute, predecessor of the guitar, but guitarists have always found the rest of his music as amenable to adaptation as every other musician. Luigi Attademo recorded all of Bach’s lute music a decade ago on a 2CD Brilliant Classics album (94294) which attracted glowing reviews in the international press for the combined rigour and imagination of his playing.
On this new recording he turns to pieces originally conceived for cello (the Preludio of the First Cello Suite), violin (the Chaconne from the D minor Partita), harpsichord (the Aria from the Goldberg Variations) and flute (the Siciliano from theE flat major Sonata) which have gained iconic status in the three centuries since their composition for their surface simplicity and expressive depth.
The recital includes several stimulating pairs: the Aria from the Goldbergs with the Air from the Third Orchestral Suite; Gavottes from the Sixth Cello Suite and E major Violin Partita; the Siciliano from the G minor solo sonata for violin preceding the more famous flute example. These pairs only serve to underline the variety of Bach’s response to a particular genre.
Grandest and most superficially complex of the works here, the famous D minor Toccata and Fugue proves highly idiomatic on the guitar, relating the virtuosic and extrovert writing back to what we now think must be a lost violin original for the piece (possibly not even by Bach) rather
than the form for organ which is now universally known.
Attademo contributes a personal introduction to the album which explains his choice of repertoire and interpretative approach, taking inspiration from great Bach players of the past such as Mstislav Rostropovich and Dinu Lipatti.

Praise for Luigi Attademo’s Bach
‘Attademo overcomes these obstacles in a brilliant and original way, treating the score in an extremely rigorous but always musical way… It is clear that Attademo pondered deeply how to make this landmark recording… making the essence of this music resonate in all its fullness. The attention paid to the examination of these elements acts as a counterpoint to the personal taste of the performer.’ Il corriere musicale

· The guitar as we know it did not exist in Bach's time - there was the baroque guitar, but it was not widespread in Germany. The closest chordophone instrument to Bach was the baroque lute, an instrument that the genius from Eisenach had among his instruments but probably did not play.
· Bach’s music is often described as indestructible, in the sense that no matter how it is performed, or in whichever arrangement, its essential spirit survives. Therefore transcriptions of the Master’s works are common, today as they were in Bach’s time. Bach himself was an ardent transcriber of his own music and that of others!
· This new recording presents instrumental works by Bach transcribed for and played on the modern guitar. Included are many famous and popular works: Air (from the Orchestral Suite No. 3), Chaconne (for violin solo), Jesu, meine Freude, Sicilienne (original for flute and harpsichord), Aria from Goldberg Variations and many more.
· Luigi Attademo is one of today’s foremost guitarists, with an extensive discography to his name: for Brilliant Classics he recorded works by Paganini (BC 94963, 94348), Scarlatti (BC 91252), Bach (BC 94294) and two CD devoted to historical guitars (BC 95024, 95702).
More Less