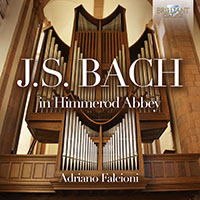 In 1731, Johann Sebastian Bach was commissioned to write a cantata to mark the inauguration of the new town council in Leipzig. The resulting piece, Wir danken dir, Gott begins with a Sinfonia, based on a transcription for organ and orchestra of the prelude from Bach’s own Partita No.3 in E major for solo violin BWV 1006. Marcel Dupré’s highly virtuosic organ arrangement of the work removes the orchestra and adds a pedal line, giving all the various parts to the solo organ.
Bach’s Chromatic Fantasia and Fugue BWV903 was originally written for harpsichord. Bach may have written this piece, like the Well-Tempered Clavier, as proof of the power of equal temperament to explore the various keys and get the most out of the instrument’s tonal resources. Max Reger’s transcription uses changes of manual and stops and the technique of dividing the parts between the manuals and pedals to emphasise all the work’s unique aspects.
Bach was a huge admirer of Antonio Vivaldi and transcribed several of his concertos for solo keyboard. The Concerto in D minor here is taken from Vivaldi’s L’estro harmonico, a collection of soloconcertos that brought the composer much acclaim. Bach’s arrangement follows the original division into four movements and, interestingly, this work was one of the few times Bach noted the stops the organist should use.
The Chaconne from Bach’s Partita No.2 in D minor BWV1004 is another solo violin transcription, arranged for organ by Ulisse Matthey. A chaconne is a composition derived from a moderate-paced dance in ternary time, probably of Spanish or South American origin, comprising a series of variations over a basso ostinato. Matthey’s transcription for organ gives the listener an even greater appreciation of the complex polyphony and sophisticated counterpoint that pervade the piece’s 32 eight-bar variations.
The Flute Sonata BWV1031, attributed to J.S. Bach but potentially composed by his son Carl Philipp Emmanuel, is divided into three movements, the most famous of which is undoubtedly the Sicilienne, here in the version transcribed for solo organ by Louis Vierne. In musical terms a sicilienne or siciliana is a slow-paced dance, typically in the minor mode and usually in 6/8 or 12/8, characterised by dottedrhythms that are meant to recall a pastoral atmosphere.
The Prelude and Fugue BWV552 is considered one of the greatest achievements in the history of music. It is full of hidden symbolism, all celebrating the mystery of the Trinity: the three flats in the key signature, three themes in the Prelude and three subjects in the Fugue, are references to the numbers 9 (3×3) and 27 (3×3×3). The themes stylistically depict a part of the Trinity: the Father is solemn and majestic, the Son is livelier, and the Holy Spirit has a joyful feel. Like the chaconne, the Passacaglia is a moderate-paced dance in ternary time of Spanish origin. Here, once again, Bach’s writing conceals several numerical symbols: ternary time, three flats in the key signature, and seven groups of three variations, making a total of 21 variations (2+1=3).

· This new recording presents the unique Klais organ of the Himmerod Abbey (Germany) in its full glory.
· The Klais organ was built in 1962. Judging from the stop list, the organ certainly fits the description “typical Neobaroque.” But having once heard the instrument, embedded as it is in the cathedral acoustics of the impressive Himmerod hall church, it is apparent that the organ is acoustically far ahead of its time. Particularly the warm, cantabile voices of the Flötenchöre impart a distinct, light Romantic sound and the combination of gentle strings (Viola di Gamba) and their corresponding undulating stop, indispensable to the Catholic liturgy, was considered as a “Neoromantic” tendency in 1962. The Himmerod organ created a new style, merging for the first time in a contemporary work the classic organ building tradition with a sound departing from the Neobaroque, thus creating an exemplary synthesis of styles and sounds.
· Italian organist Adriano Falcioni chose a fitting, spectacular program for this organ showcase: three organ transcriptions, the famous Chaconne (arr. Matthey), Chromatic Fantasy & Fugue (arr. Reger) and Sicilienne (arr. Vierne), a Vivaldi/Bach Concerto, and the mighty Passacaglia BWV 582.
· Adriano Falcioni’s recordings for Brilliant Classics encompass many of the Romantic era’s most celebrated organ composers. Praise in Fanfare for his previous albums: ‘Falcioni clearly has the right feel for this repertoire, in tempos and registrations and ability to bind together phrases and sections into coherent larger wholes’ (Reger, 95075). ‘A top contender… Everything is idiomatically played by Adriano Falcioni on a fine instrument… Strongly recommended’ (Brahms, 94460). Further praise for the Reger album, recorded on the same organ as the present set of Liszt, came from the Italian Organ Compendium: ‘Highly recommended to our readers, who will find an excellent repertoire, a very good interpreter and an instrument of great interest.’
More Less