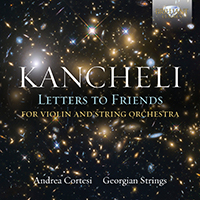 Giya Kancheli’s cult reputation as one of the most profound musical voices of our time has not always been matched by the availability of his music on record. These world premiere recordings of works written (or recomposed and arranged) between 2016 and 2018 are thus a significant contribution to the Kancheli discography. They find the composer at his most charming and epigrammatic in a series of 25 musical ‘letters’ for violin and string orchestra. Most of them are under three minutes in length, taking their material from themes written by the Georgian composer for the film scores which he has composed throughout his career.

Compared to his more celebrated concert works such as the symphonies and cantatas of often starkly imposing and monumental expression, these letters strike a more whimsical, often wistful tone. The subjects – to whom they are addressed – are mostly actors and directors who have worked on the films scored by Kancheli. But there are also pieces written with palpable affection to performers such as the composer Jansug Kakhidze, who have championed his music over the years, to fellow composers such as Bidzina Kvernadze, and to artistic friends such as the writer, puppeteer and painter Revaz Gabriadze.

The project was initiated by the violinist Andrea Cortesi, who had asked for a piece for violin and string orchestra. Kancheli returned to a cycle of 18 miniatures he had written for violin and piano with Cortesi in mind, and then further back to a collection of 33 piano-only miniatures. Kancheli explains this in a booklet introduction, complemented by a fuller essay from Cortesi, making this album an authoritative recording of Kancheli at his most appealing – perhaps the ideal introduction to his unique voice.

Giya Kancheli is a Georgian composer whose intensely personal style is closely related to Minimalism and New Spiritualism.
Kancheli’s “Letters to Friends” is an anthology of themes from his film music, rewritten and collected in a cycle for violin and string orchestra, especially made for violinist Andrea Cortesi. Each piece/letter carries the name of a different Georgian friend of the composer, the cycle is a tribute to friendship, sharing creativity and connecting life and art.
The performers are the Georgian strings and violinist Andrea Cortesi. Kancheli himself is very happy with this project: “My sincere gratitude goes out to the musicians and the sound team for taking such good care of my music and for the brilliant sound”.
The previous Kancheli recording of Andrea Cortesi, “Miniatures for Violin and Piano“ was issued on Brilliant Classics BC95267, and received great critical acclaim in the international press.
More Less