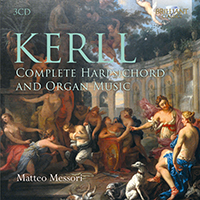 The first complete collection on record of the keyboard works by an organ virtuoso of 17th-century Austria and a notable forerunner of J.S. Bach.

The sacred vocal music of Johann Caspar Kerll (1627-1693) has attracted its fair share of attention, with recent recordings devoted to his Masses and the Requiem he composed in 1669 while still a court musician in his home city of Munich. However, during his lifetime Kerll was known above all as a superb organist. Having composed a Mass for the coronation of Leopold I in 1658, he was furnished with the subject for an improvisation by none other than emperor himself, and Kerll’s astonishing invention became the stuff of legend, being recalled in 1740 by the theorist Johann Mattheson, in an age long before the testamentary value of recordings.

Kerll’s original compositions retain the freshness and vitality of his performances, as later composers recognised. Handel adapted the entire fourth Canzona for the chorus ‘Egypt was glad when they departed’ in for Israel in Egypt and used part of the cheeky Capriccio Sopra il Cucu in the second movement of an organ concerto. His masterpiece is the Modulatio organica, which contains some of the finest contrapuntal writing for organ before J.S. Bach. It was composed in 1679 in response to the plague of Vienna, which claimed thousands of victims including the composer’s wife; with eight sets of organ versets to be played in alternation with sung verses of the Magnificat, Kerll assembled a work whose comprehensive mastery of technique anticipates The Well-Tempered Clavier.

Receiving its first complete recording, the Modulatio organica occupies the last CD of this invaluable guide to the landscape of Austro-German music in the generations before Bach.

Matteo Messori precedes it on CD1 with the 11 toccatas and 6 canzonas, which build on the legacy of Frescobaldi and his pupil Froberger to test the player’s skill and imagination to the utmost. The main works on CD2 are a set of four brief keyboard suites which Matteo Messori plays on a pair of historically apt harpsichords. For the organ works such as the Modulatio Organica, his chosen instrument is the colourful organ built by Johann Ignaz Egedacher in 1732 for the Pfarrkirche Mariä Himmelfahrt of Vornbach am Inn in Germany.

Bach: Clavierübung III (92769): ‘A convincing performance… presented with elegance, style and thoughtful expression... Technically speaking the recording is absolutely perfect… In anticipation of Matteo Messori's next recording projects (Bach's Art of Fugue and Kerll's opera omnia), we highly recommend this set to our readers.’ (Organ Compendium)

Johann Caspar Kerll (1627-1693) was born in Saxony, where his father was a Lutheran organist. His musical talent was discovered at an early age and he went to Vienna to study with Giovanni Valentini, the court Kapellmeister. After serving as an organist at the court of the Archbishop of Brussels he went to Rome, to study the works of the great Italians. Here he met Froberger and Carissimi, from whom he learned the new Italian vocal and instrumental styles. Ultimately he settled at the court in Munich, where he stayed till his death, a famous composer, performer and teacher.
Kerll’s complete keyboard works include Toccatas, Suites and instrumental settings of the Magnificat, both for harpsichord and organ. The Toccatas are clearly modelled on those by Frescobaldi, but make even greater demand on the technical ability and virtuosity of the performer, in their rapid scales and instrumental brilliance in free passages, whereas the harmonic language often is coloured by unusual chromatism.
Matteo Messori is one of the leading Baroque keyboard players of Europe; his previous recordings for Brilliant Classics (Kunst der Fuge, BC 94061 and Clavierübung, BC 94201) have been awarded 5 star reviews in international classical magazines (Fono Forum: “…entered the top league of European Bach interpreters”). His Schütz edition (BC 94361) is a recorded landmark for that still neglected master.
The extensive scholarly written liner notes in the booklet are by the artist himself.
More Less