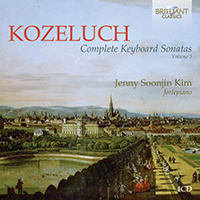 The third volume in an ambitious and critically acclaimed series with the recordings of the complete keyboard sonatas of a significant Bohemian contemporary of Haydn and Mozart.

Leopold Koželuch (1747-1818) was a Bohemian composer-pianist who moved to Vienna in 1778, three years before Mozart settled there. The sonatas (50 in total) share qualities with the work of his teacher Dussek, and Burney’s contemporary assessment of Kozeluch’s music stands true today: ‘natural, graceful and flowing, without imitating any great model, as almost all his contemporaries have done. His modulation is natural and pleasing… His rhythm is well phrased, his accents well placed, and harmony pure.’

Volume 3 covers Sonatas Nos.17-33, written between 1785 and 1791. No less than Haydn’s work in the genre, they invent ever-new and imaginative forms. The two-movement No.18 contrasts a gentle set of variations with a dashing Allegro; the three-movement No.19 in F minor opens with a grave slow movement introducing a passionate, exploratory Allegro agitato; the A major No.20 returns to the free-spirited pastoral idiom of Kozeluch’s background, with a lilting opening Allegro, a reflective but smiling Adagio and freewheeling finale. Such variety of form and temperament continues throughout the collection.

‘Jenny Soonjin Kim plays with an almost Baroque flair well-fitting of the music… The period treatment that Kim brings to the kozeluch Koželuch sonatas gives them a crisp texture and very nearly tactile character... Kim's performance is commanding and authoritative. The sonics are superb… an inspired and inspiring collection.’ (All About Jazz, reviewing volume 1)

‘Kim’s playing is crystalline and lyrical, with exquisitely sensitive phrasing. She is an assured virtuoso who interprets Koželuch’s music beautifully. This set will interest pianists who would like to augment their repertoire with unknown gems from the period.’ (Early Music America)

On this album Jenny Soonjin Kim plays a modern German copy of an Anton Walter fortepiano made in Vienna in 1795.

Leopold Kozeluch (1747-1818) was in his time a highly regarded, even famous composer, on a par with C.P.E. Bach and even Mozart. His keyboard sonatas, although relatively modest in length, share the same qualities with those of his illustrious contemporaries: strong focus on melody and melodious figuration, vivid and brilliant accompaniments and a genuine expression of feeling, both happy and dramatic. His 50 keyboard sonatas are a true treasure trove of hidden “pianistic” gems! The sonatas in this new set clearly show an evolving, advanced style in terms of dramatic expression and complexity, as well as certain melodic and harmonic characteristics also found in the keyboard works of Mozart, Beethoven and even Schubert.  An international artist who regularly performs music ranging from Bach to Schoenberg in major venues across Europe, Asia and North America, Jenny Soonjin Kim is also a faculty member at Claremont Graduate University in California, where she teaches piano and fortepiano. It is her keen interest in scholarship – particularly historical performance practice – that led to her discovery of Kozeluch. The booklet contains excellent liner notes written by Robert Zappulla.