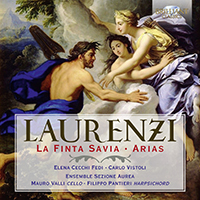 The torments of love conveyed by a contemporary of Monteverdi in the context of an operatic celebration of 17th-century Venice.

L’Incoronazione di Poppea is renowned not only as Monteverdi’s last work but also his most affecting. Almost equally famous, however, is the historical oddity that its sublime conclusion is almost certainly not his work. Sung as Nero and his new wife drift off in amoral bliss, ‘Pur ti miro’ has been attributed to various of Monteverdi’s Venetian contemporaries. However, among the most plausible candidates is Filiberto Laurenzi. Very little is known of his life except for his encounter with the soprano Anna Renzi, considered the first diva in the history of opera. She not only studied under Laurenzi, but also let him manage her career, following him when he left Rome for Venice.

The duet is featured here alongside excerpts from an entertainment conceived when the genre of opera was still in its infancy. Like Poppea, La finta savia was first performed during the 1643 Venetian carnival season. It may be counted an early example of the pasticcio genre, in which a dramatic piece is the work of several hands, among them in this case Leardini, Pozzi, Ferrari, Giovan Battista Crivelli and Tarquinio Merula alongside Laurenzi. This recording includes five virtuoso arias making use of dance rhythms, some of them intimate in atmosphere and others that are more brilliant, such as ‘Tant’armi inventate’.

These operatic excerpts are complemented by arias from a 1641 collection dedicated to Laurenzi’s work. The highlight is probably ‘Così mi lasci ingrato’, a deeply affecting lament for lost love on words by Ottaviano Castelli. There also instrumental works and transcriptions by three composers who also left Laurenzi’s native Romagna region to seek fame and fortune elsewhere, notably Venice (though Laurenzi himself probably died in Rome): Marco Uccellini, Domenico Gabrielli and Domenico Ferrabosco.

Ensemble Sezione Aurea is a mixed ensemble of voices and instruments founded in 2013. It gathers together some of the finest European baroque musicians active on the concert and recording scene.

This new recording presents a selection of the most beautiful arias from La finta savia written for Venice in 1643 by Filiberto Laurenzi (1620-1651), a composer from Bertinoro. Laurenzi worked between Rome and the most renowned courts of Italy and especially with the wellknown singer Anna Renzi, the first diva in the opera field. In addition to La Finta Savia’s highlights, several other composers are presented, active in the Romagna in the period 1640-1645: Marco Uccellini, Giovanni Ceresini, Claudio Monteverdi and Domenico Gabrielli, of whom we hear madrigals, arias and instrumental works.
The recording features two excellent and famous Italian soloists: Elena Cecchi Fedi (soprano) and Carlo Vistoli (counter tenor). The Ensemble Sezione Aurea features violins, theorbo, cello, baroque guitar, percussion and harpsichord, concert master is Filippo Pantieri.
More Less