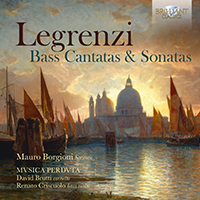 The Venetian composer Giovanni Legrenzi (1626-1690) wrote a total of eight cantatas and canzonettas for bass voice with a continuo accompaniment, all but one presented here in new, historically informed recordings by a distinguished Italian ensemble specialising in Italian chamber music of the Baroque. His cantatas are longer than those of other Venetian composers of the period, with richer counterpoint between the vocal part and the continuo and freer movement between recitative and aria. Just as the recitatives are often rich in pathos, so the arias reveal great variety of form in both the vocal and the continuo part. While the continuo part is sometimes spare and at other times more elaborated, it supports the vocal line with naturalistic illustration of the text.

Legrenzi often conjures up comicalsituations for the bass voice: for instance, in the canzonetta Son canuto e d’un bambin, where the words revolve around the idea that there are slaves of love even in old age; or in the cantata Dal calore agitato, where the subject is the erotic dreams of a poor Arcadian shepherd.
The three trio sonatas on this recording are among Legrenzi’s best instrumental compositions. They come from the six printed collections of instrumental sonatas, and are all à violino (played in this version on the cornett, which was common practice in the 17th century) and viola da brazzo). Within conventional formal structures, Legrenzi invests these works with a remarkably advanced sense of melody. The impression is Legrenzi was most at home working with a small ensemble, rather than with the larger groups of instrumentalists that had become common in 17th-century
Venice.

Praise for Mvsica Perdvta on Brilliant Classics:
‘The overall impact is simply stunning… the most exciting and original Handel cantata I’ve heard in many a year.’ (Fanfare on Handel cantatas, 94426)

‘Director Renato Criscuolo keeps his forces tightly under control, which adds stability to the music. As the cellist in the sinfonia, he gives a rather rousing performance, which brings the music alive.’ (Fanfare on Pergolesi, 94763)

‘The ensemble, like the cellist, plays with sensitivity and personality… This is a lot of fun.’ (Fanfare on Porpora, 95279)

· Giovanni Legrenzi was an Italian composer of opera, vocal and instrumental music. He held several important posts as court musician and Maestro di Cappella in Ferrara, Mantua, Bologna and finally Venice, where he was appointed at the prestigious San Marco.
· Legrenzi was active in most of the genres current in northern Italy in the late 17th century, including sacred vocal music, opera, oratorio, and varieties of instrumental music. Though best known as a composer of instrumental sonatas, he was predominantly a composer of liturgical music with a distinctly dramatic character.
· This new recording presents secular Cantatas for bass solo and basso continuo. The texts deal with the classic topic of unhappy love, causing insufferable but sometimes also exquisite pain in the injured lovers. Legrenzi is a master in musically expressing the extreme emotions of the text.
· Mauro Borgiono is one of the most prominent young baritones of the moment. As a specialist in Early Music he worked with Jordi Savall, Rinaldo Alessandrini and Diego Fasolis. Musica Perduta, directed by Renato Criscuolo, consists of cornet, bass violin, theorbo and harpsichord.
The booklet contains extensive liner notes and the original sung texts.
More Less