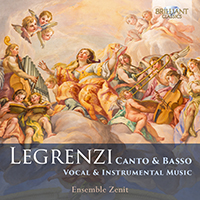 Stylish new recordings of psalms, songs and dances from Italy in the last of the 17th century, centred around the protean figure of Giovanni Legrenzi.

Born in 1626, Legrenzi was a native of the Marches region of northern Italy who made his career as an organist first in Bergamo and then the more cosmopolitan city of Ferrara, where he became maestro di cappella of the Accademia dello Spirito Santo in 1656. The music on this album dates from the following two decades, when despite professional frustrations his work was fired with tireless compositional élan. He began to perfect the style of the instrumental sonata and to favour the non concertato vocal repertoire, featuring one or more voices accompanied by basso continuo alone, with collections such as Harmonia d’affetti devoti of 1655, Sentimenti devoti of 1660, Compiete con le Lettanie & Antifone della B.V. of 1662 and Acclamationi divote a voce sola of 1670.

On good stylistic and aesthetic grounds, the musicians of Ensemble Zenit have chosen to play a selection of works from these collections on cornet and trombone. They intersperse them with four pieces for organ relating to the composer’s periods of work in in Bergamo, Ferrara, Bologna and Venice. Legrenzi wrote keyboard sonatas himself, but none has come to light, so Ensemble Zenit features four composers who represent each of those four cities: Tarquinio Merula (1595-1665), chapel master in Bergamo until shortly before Legrenzi’s arrival and unquestionably a source of inspiration for the way he structured his Sonate; Luigi Battiferri (1610-1682), Legrenzi’s predecessor as chapel master at the Accademia dello Spirito Santo in Ferrara; Giovanni Paolo Colonna (1637-1695), organist in Bologna, and Carlo Francesco Pollarolo (1653-1723), who studied under Legrenzi in Venice and was appointed second organist at St. Mark’s just two months after the death of his teacher in 1690.

Giovanni Legrenzi (1626-1690) was an Italian composer of opera, vocal and instrumental music. He held several important posts as court musician and Maestro di Cappella in Ferrara, Mantua, Bologna and finally Venice, where he was appointed at the prestigious San Marco.
This new recording presents Sonatas and Motets for solo voices (alto and tenor) played by organ, cornetto and baroque trombone. The use of these brass instruments is in the tradition of Castello, Cima and Fontana. In addition we hear works by contemporaries Merula, Battiferri, Pollarola and Colonna. The use of the brass instruments lends a special festive character to these highly attractive, melodious compositions.
Played by Ensemble Zenit, specialized in this particular repertoire, and alto Isabella di Pietro and tenor Roberto Rilievi. The booklet notes are written by an Italian musicologist.
More Less