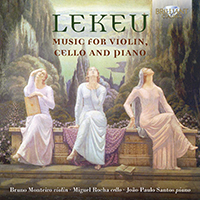 Legend has it that in 1889, the 19-year-old Guillaume Lekeu fainted upon hearing Wagner’s Tristan und Isolde in Bayreuth. Just five years later he was dead, having contracted typhoid from a contaminated sorbet.

The Belgian Lekeu left behind him a small but individual output of mostly chamber music. He found his voice as a precocious teenager, and felt able to declare at the age of 17 that his music might be ‘weird, mad, horrible, anything you like, but at least it will be original!’ Following both Wagner and his principal model, César Franck, the predominant mood of his music is melancholy: ‘Joy is a thousand times harder to paint than suffering,’ he once declared.

This album features his two best-known works. Dating from 1890, the Piano Trio is in fact one of his most restrained and least Wagnerian pieces. A complex first movement is full of fleeting expression, followed in more conventional form by a slow movement, scherzo and finale with slow introduction.

Commissioned by his fellow Belgian, the violinist Eugène Ysaÿe, Lekeu’s Violin Sonata is his masterpiece. It attains a rare balance and purity of expression through a beautifully balanced relationship between the instruments and through the kind of cyclical unity of form and melody that Franck perfected.

These performances are led by the Portuguese violinist Bruno Monteiro, whose discography on Brilliant Classics includes widely praised albums of Schulhoff (BC95324) and Szymanowski (BC94979). ‘Every release from Bruno Monteiro and João Paulo Santos confirms them as a tremendously adventurous and musical partnership.’ (Classical.net). ‘Classical CD of the week’ in Forbes (Szymanowski). ‘The skills of Monteiro are well attuned to the needs of the idiom. He always sounds engaged and passionately committed, with plenty of colour and spirit in his playing.’ (MusicWeb International, reviewing the Szymanowski)

Guillaume Lekeu (1870-1894) was born in Veviers, Belgium. He studied music and philosophy in Paris. A visit to Bayreuth brought him under the spell of the music of Richard Wagner. Upon his return he took lessons with César Franck, who was his mentor and greatest music inspiration. Lekeu was one of the foremost talents of his generation and his tragically early death robbed music history of a great promise.
Lekeu mainly composed chamber music. This new recording features his beautiful and substantial piano trio as well as his violin sonata. The musical language is melancholy, mysterious and based on the extended chromaticism of Wagner and Franck.
Played by Bruno Monteiro (violin), Miguel Rocha (cello) and João Paulo Santos (piano), who already made several successful recordings for Brilliant Classics with works by Schulhoff and Szymanowski.
More Less