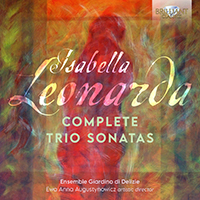 Born into a noble family, Isabella Leonarda (1620-1704) entered the Ursuline Convent in the Piedmontese city of Novara at the age of 16. Having taken holy orders she lived there for the rest of her life as a religious sister, later its director of music and Mother Superior. She evidently showed musical promise from an early age, as the first of her published collections of music dates from as early as 1640, when she was just 20 years old.

Following the Brilliant Classics portrait of Isabella Leonarda’s vocal output from Cappella Artemisia directed by Candace Smith (96626), the all-female ensemble of Giardino di Delizie presents a set of 11 Trio Sonatas which was published in 1683 as the composer’s Op.16. Isabella dedicated it to the Virgin Mary with a devotional preface: ‘If these pieces do not please the World, I shall be content if You like them, because You appreciate the heart above the intellect.’

In fact, Isabella’s music greatly pleased the rest of the world at the time: according to one French collector, ‘All the works of this illustrious and incomparable Isabella Leonarda are so beautiful, so charming, so brilliant, and at the same time so knowledgeable and so wise ... that my great regret is not to have them all.’
While the Sonatas do not exhibit the bold contrasts or rich harmony of her contemporary Corelli, they nonetheless rise above many other contemporary examples of the genre, not least in the improvisatory freedom of their writing, especially in the slow movements. They are written for two violins, violone and organ continuo, which makes them all trio sonatas in which the the violins. violone parte dialogues on equal terms with the violins.

Previous albums from this exciting early-music ensemble have all met with a warm critical response from the international press. ‘The performance sounds completely natural, full of spontaneity and bursting energy. It’s clear the group really likes this music and does not merely try and lecture it.’ (Lonati, 95590 theclassicreview.com). ‘Giardino di Delizie… take an energetic and imaginative approach to this fine music… playing with sensitivity and considerable musicality.’ (Colista, 96033, earlymusicreview.com). ‘A garden of delights, sensitively and beautifully performed, perfect for any lover of the Baroque.’ (Gems of the Polish Baroque, 95955, MusicWeb International).

The only instrumental works by Isabella Leonarda are the twelve sonatas for 1, 2, 3 and 4 instruments belonging to Opus 16. No woman prior to Leonarda produced so much non liturgical music, and she is the only woman in the 17th century to have published sonatas for the church. The first eleven sonatas in this recording are written for two violins, violone and organ continuo, which makes them all trio sonatas in which the violone part dialogues on equal terms with the violins. These excellent works show that Leonarda belongs to the group of composers of the 1600s who significantly contributed to the development of the trio sonata, a genre later perfected by Arcangelo Corelli.
Founded in 2014 by the violinist Ewa Anna Augustynowicz, Ensemble Giardino di Delizie is a female quartet of early-music experts based in Rome but working internationally, not only with each other but also within groups led by Christophe Coin, Enrico Onofri, Fabio Bondi and other luminaries of modern Baroque performance. Their previous recordings with music by Lonati (BC 95590), Colista (BC 96033) and Stradella (BC 96079)were reviewed enthusiastically by the international press.
More Less