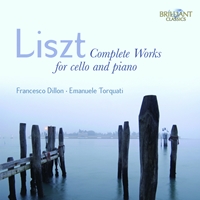 Many of Liszt’s works were transcribed for other instruments, both by the composer himself and other musicians.These hauntingly beautiful pieces for cello and piano were originally written for piano solo or the voice. They are from the final period of his life and are the product of his old age and his quest for spirituality. Far from the virtuoso brilliance of his earlier works, their intense and romantic melodies express melancholy and desolation, the sparse textures and harmonic instability daringly looking forward to the twentieth century. The rich and warm expressive qualities of the cello undoubtedly make these pieces even more effective.

The most significant work in this collection is La lugubre gondola, a compelling piece written after Liszt had a premonition of Wagner’s death. It was inspired by the Venetian gondola funeral processions he observed during a visit to the city to see Wagner.The music conveys the stillness of a Venetian lagoon, the unsettling harmonies also evoking the underlying darkness and despair. Another work with a very personal connection is the nostalgic Die Zelle in Nonnenwerth, a transcription of one of his songs. Nonnenwerth was an island in the Rhine where Liszt spent time with Marie d’Agoult and their children, and his fondness for the work resulted in many different versions for solo piano, voice and piano duet as well as this version for cello and piano. There are also transcriptions for cello and piano by other musicians of some of his most popular piano works, including the six Consolations, Angelus! from the third volume of Années de Pelèrinages and the Liebestraum No.3.

The performers of this moving collection of works are the Italian cellist Francesco Dillon and the pianist Emanuele Torquati. Francesco Dillon performs as a soloist and with chamber groups all over the world and has made several recordings of unusual cello repertoire, including an album of Schumann rarities for Brilliant Classics.

About Duo Dillon – Torquati:
• The Duo is a union of two interpreters not only devoted to an open-minded exploration in the standard repertoire but also particularly sensitive to exploring neglected and hidden works. Moreover, both Francesco Dillon (Prometeo String Quartet and Alter Ego) and Emanuele Torquati are notable performers of New Music. As a Duo, they have worked closely with composers such as Jonathan Harvey and Kaija Saariaho and gave first performances of major works by Brett Dean, Toshio Hosokawa, Alessandro Solbiati.
• www.francescodillon.com
• www.emanueletorquati.com
More Less