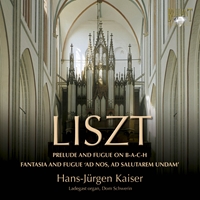 Liszt composed only a small number of works for the organ, but among them are two of the most impressive works in the instrument’s repertoire. These works are contained on this CD, performed on an organ that has a direct link to Liszt. In 1855 his pupil Alexander Winterberger played the Fantasia and Fugue ‘Ad nos, ad salutarum undam’ which Liszt had dedicated to Meyerbeer on the Friederich Ladegast organ at Merseburg Cathedral. The organ in Schwerin is almost identical to the instrument at Merseburg. The other major work Liszt composed for organ is the Prelude and Fugue on the name BACH. This was dedicated to Winterberger. The Fantasia and Fugue is a huge work lasting over half an hour, with a brilliant fantasia on a theme from Meyerbeer’s ‘La Prophete’. The meditative adagio is shattered by a violent fortissimo which leads into the fugue, and the heroic conclusion. The Prelude and Fugue on BACH also opens brilliantly with the four notes that make up the name Bach undergoing endless ingenious variations. The fugue begins with a strange section where tonality is suspended for a time, with the four note ‘name’ appearing as an ostinato under staccato chords. The variations on ‘Weinen, Klagen’ from Bach’s Cantata no 12 was written for piano in 1860, and is remarkable for its use of chromaticism – again, tonality is under great strain.

Other information:
- Includes a detailed booklet note by Hans-Jürgen Kaiser, including full organ specifications
- Kaiser has recorded the complete organ works of Reger and Franck. He is the organist at Fulda Cathedral.
More Less