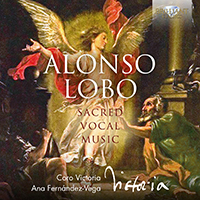 Motets and Mass movements by a master from the Golden Age of Spanish polyphony.

On this new recording, Coro Victoria offers a portrait of Alonso Lobo (1555-1617) through a cross-section of his sacred output (his works in Spanish are all lost). The group also illustrates the variety of interpretative practices of the period. The concluding O quam suavis est Domine is sung by a single soprano while the vihuela accompaniment supplies the remaining five parts. Church choirs sang this music in the liturgy, but minstrels also played it during processions, and there was free traffic between sacred and secular contexts.

Coro Victoria was founded by its director, Ana Fernández-Vega, to recover and preserve a native, historically informedtradition of singing Spanish polyphony from its Renaissance-era high noon, exemplified not only by Victoria himself but also his contemporaries such as the Seville-born and bred Alonso Lobo (indeed, Victoria considered Lobo his equal). He is now best known for a haunting, six-voice setting of the Requiem, and his magnificent motet for the obsequies of King Philip II, Versa est in luctum shares the Requiem’s tone of mourning and remembrance, established by a dense mesh of overlapping counterpoint.

Coro Victoria also presents other sides to a composer whose style is far more various than is commonly assumed. As well as the beautifully handled techniques of canon and counterpoint in Marian motets such as Ave Maria and Ave Regina coelorum, distinguishing features of Lobo’s style are his jagged melodic lines, a far cry from Palestrina’s smooth curves, and his more animated conclusions, both vividly demonstrated by Vivo ego, dicit Dominus.

There is also a complete, portmanteau setting of the Mass, drawn from his Missa O Rex gloriae, Missa Petre ego pro te rogavi and Missa Simile est regnum caelorum, with the Credo filled in by the separate Credo Romano, which is underpinned by a figured bass and continued to be popular long after his death. These polished performances should renew wider interest in Lobo’s music.

Alonso Lobo (1555-1617) was born in Sevilla (Spain) and was taught by the great Maestro de Cappilla of that city’s cathedral, Francisco Guerrero. Between 1591 and 1593 Lobo was Guerrero’s assistant as master of the boys choristers. Later Lobo moved to Toledo as master of the Cathedral, only to return to his native Sevilla in 1604, where he got the prestigious post of Maestro de Capilla of the city’s cathedral till his death. Lobo may be regarded as one of the most important Spanish Renaissance composers, in the same illustrious company as Guerrero and Victoria, two composers with whom he collaborated closely. His style is complex and rich, a model of Palestrinian counterpoint.
The aim of this recording by the Coro Victoria is to offer a cross-section of the differing styles used by Lobo in his output of Latin masses and motets (his works in Spanish are all lost). But it also illustrates the variety of interpretative practices of the period in the choice of accompanying instruments.
The extensive liner notes are written by conductor Ana Fernández-Vega.
More Less