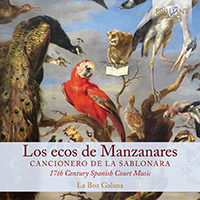 The Manzanares flows from the Sierra de Guadarrama and passes through Madrid, on its way to join the Jarama river, which in turn becomes swallowed by the mighty Tagus. On the banks of the Manzanares, the young Madrileños of the 1600s would sunbathe and drive horses into the water. The river was as characteristic of the city’s life as the theatre, the nightlife, the guitar and the folía (Spanish dance).

Under the leadership of Philip IV, Spain was a place of dreams and ambitions, with the New World just over the horizon. The king himself was a great lover of music and dance, and he cultivated a court of singers who could accompany themselves on the guitar. They were led for a period by Alvaro de los Rios (1580-1623) who attracted musicians from across the Iberian peninsula and farther afield to enhance the cosmopolitan vibrancy of Philip’s court.

The music included on this recording is representative of the transition from Renaissance polyphony to the new Baroque style: on one hand, there are madrigal-like pieces, with elaborate contrapuntal and melodic imitation, and on the other, completely homophonic compositions based on lively rhythms, dance patterns and poems of a popular nature, such as the seguidillas.

The secular songs have been taken from a little known collection, the Cancionero de la Sablonara composed for the Royal Court of Madrid during the first two decades of the 17th century. The collection features many names little known to us now, making the album full of exciting discoveries for lovers of the early Baroque. The songs are interspersed with contemporary instrumental pieces, played here by guitar, chittarone and Spanish double harp.

Founded in 2011, La Boz Galana (‘The Galant Voice’) is a Basle-based group of musicians specialising in the Renaissance and Baroque periods, drawn from across South America and France. This album marks their debut on Brilliant Classics.

The Cancionero de la Sablonara is a collection made up of 75 polyphonic songs composed for the Royal Court of Madrid during the first two decades of the 17th century. The manuscript is named after Claudio de la Sablonara, copyist and archivist of Madrid’s Royal Chapel. Today the manuscript is kept in the State Library of Bavaria, which is why it is also called the Cancionero de Múnich.
The repertoire contained in this book consists of secular polyphonic songs. These pieces represent the greatest Spanish profane vocal music of the period and were composed by some of the most brilliant musicians active in the Madrid court. Many of the texts on which they were composed were written by distinguished poets of Spain’s Golden Age, such as Lope de Vega, Luis de Góngora and Francisco de Quevedo. The style of the music is representative of the transition from Renaissance polyphony to the new Baroque style.
Performed by the Early Music group La Boz Galana, specialized in the music from the Spanish Renaissance and Baroque.
More Less