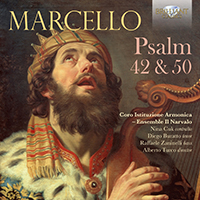 Stylish new recordings of two expansive psalm settings from 18th-century Venice.
The catalogue boasts no shortage of fine recordings of the cello sonatas and other chamber music by the Venetian nobleman Benedetto Marcello (1686-1739). However, his sacred vocal output, for which he was most highly esteemed in his own time, remains almost unknown. Several musicians are gradually redressing the balance; none more experienced in realising music of the period with flair and authenticity than Alberto Turco, whose extensive discography includes two critically acclaimed albums on Brilliant Classics, of sacred music by Giovanni Battista Fasolo (95512) and organ masses by Claudio Merulo (95145).
As on those albums, Turco takes a lively, chamber-scaled approach to Marcello which is true to the spirit as well as the letter of these scores. For the listener curious to explore the riches of 18th-century Venetian music, there are treasures galore to be found in the settings of Psalms 1-50 which Marcello composed to vernacular paraphrases of the original texts by Girolamo Ascanio Giustiniani. The complete set was published in eight opulently appointed volumes between 1724 and 1726.
Each Psalm is a spiritual cantata, not intended for liturgical use but setting the verses in madrigalian fashion for solo voices with a simple continuo accompaniment, generally abstaining from complex counterpoint and subtly moulded to the meaning of the text for maximum clarity. The Psalms were first performed in the Cavallerizza building, directed by the composer. One of the singers was Rosanna Scalfi, whom Marcello married on 20 May 1728, much to the disapproval of his family, especially his brother Alessandro.
The solo singers here are drawn from the ranks of the Coro Istituzionale Armonica, which was founded in 2018 by Alberto Turco in order to perform works by composers that have come to light in the archives of Verona Cathedral. Accompanying them, the ensemble Il Narvalo has already won critical praise for its Brilliant Classics album of music by the Spanish composer. Juan Frances de Iribarren (95859).

- From an early age Benedetto Marcello proved to be a man of great versatility: a poet, writer, musician, lawyer, judge, administrator and philologist, holding important posts in these functions during his entire life. As a composer he wrote a substantial oeuvre, covering all important fields of composition: sacred and secular choral works, opera and a large body of instrumental music.
- An important part of Marcello’s life was devoted to the Estro poetico-armonico, a substantial collection of musical settings of the first fifty Psalms in an Italian paraphrase written by Girolamo Ascanio Giustiniani (1697-1749). They were not compositions intended for the liturgy, instead, each Psalm is a spiritual cantata, a form that followed in the wake of the oratorio and religious music in general, spreading rapidly through Italy from the early 17th century. The aesthetic style of the Estro poetico-armonico avoids excessive use of counterpoint and harmony, and focuses on catching melodies and expression of the emotions of the text.
- This new recording presents the Psalms 42 and 50, performed by the Coro Istituzione Armonica and the Ensemble Il Narvalo, conducted by Alberto Turco.
More Less