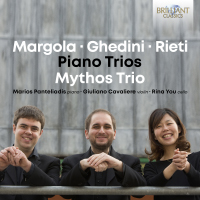 Margola was profoundly influenced by Alfredo Casella, whom he met while still a student of composition. After graduating, Margola began to compose his Piano Trio in A, and on hearing the piece, Casella immediately rated it among the best modern trios, including it in the repertoire of his own piano trio and performing it in Italy and abroad. The composition, in three movements, is characterized by drama and darkness, with moments of great expression but also fleeting, volatile brilliance. Its concision of articulation and form, its ability to consistently maintain a tight and fully logical discourse and its modern but comprehensible harmonic language all conspired to make this composition one of the most appreciated in Margola’s catalogue.

In Due Intermezzi (Two Intermezzos), written by Ghedini at the age of 23, the sublime mastery of counterpoint and use of forms that would become the composer’s signature are already evident and accomplished. Each intermezzo has a distinct character: the first, marked “tranquillo” (calm), pervaded by an intimate atmosphere giving in to momentary expressive outbursts; the second tinged with irony and a buoyant spirit.

Unlike Margola and Ghedini, who spent their entire professional lives in Italy (both renowned professors and eventually directors of conservatories), the advent of Mussolini’s fascism forced Rieti – who had Jewish roots and whose music was considered deviant by the regime – to emigrate first to Paris and then to the United States. He was a composer particularly admired by the American public and often performed there, despite being almost completely ignored in his native country.
His language is fresh, disenchanted and sparkling. Written in three movements, his trio features starkly contrasting thematic sections: the dominant character of the first and third movements is lively and witty, whereas the second movement – perhaps, the most compositionally intriguing – is lyrical and cantabile.

Other information:
- Bilingual booklet in English and Italian contains notes on the composers and their works as well as a biography of the ensemble
- This CD presents Piano Trios by three renowned composers from 20th century Italy: Franco Margola, Giorgio Federico Ghedini and Vittorio Rieti.
- Although initially oriented towards Ildebrando Pizzetti’s style, Margola was profoundly influenced by Alfredo Casella, whom he met when he was still a student of composition. His Piano Trio is characterized by drama and darkness, with moments of great expression but also of strong vitality.
- In Due Intermezzi, composed at the age of 23, Ghedini’s signature sublime mastery in counterpoint and use of forms is already evident and accomplished; the two intermezzi are distinguished by their different characters: the first one is denoted as “tranquillo” (calm), mainly pervaded by an intimate atmosphere giving in to momentary expressive outbursts, whereas the second one is marked by a buoyant spirit and irony.
- Unlike Margola and Ghedini, who spent their whole professional lives in Italy, the advent of Mussolini’s fascism forced Vittorio Rieti, who was of Jewish origins and whose music was considered not in line with the regime, to emigrate first to Paris and then to the United States.
- Mythos Trio, founded in Rome when the member musicians were in their post-graduate studies at the Accademia Nazionale di Santa Cecilia, debuted in March 2012 at the prestigious Academic Hall of Conservatorio “S. Cecilia”. Since then, they built an impressive career, performing on many international stages.
More Less