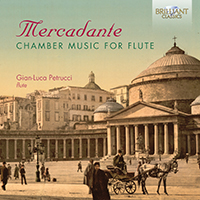 A unique compilation of chamber music in new recordings to celebrate the diverse legacy of a noted Italian impresario, a century and a half after his death.

At the time of his death in 1870, Saverio Mercadante was known as a director and administrator first and foremost, who had steered opera houses and then conservatoires through choppy waters at an especially eventful time in Italian political history, rising to become the dominant figure in the musical culture of mid-19th century Naples. Secondly, he was acknowledged as an opera composer of distinction and fluency, if not ranked on the level of lyric geniuses such as Rossini and Bellini. A stroke in 1862 left Mercadante blind, and he began to concentrate his remaining energies on the field of instrumental music which had launched his career in the 1810s.

Almost immediately after his death, however, Mercadante’s name became obscured, and only in the last couple of decades have his operas and other works been revived outside his native Italy. Most of the works on this album were composed at either end of his long career, but they are unified by the vocal style of writing for his chosen solo instrument. Perhaps because he valued it as a soprano without words, so to speak, Mercadante wrote much for the flute – concertos, trios, quartets and more – and it takes on the character of a bel canto heroine in his hands, exploiting the resources of the most accomplished performers with coloratura agility and elegant phrasing.

Gian-Luca Petrucci’s choice of repertoire opens with a work specifically indebted to the lyric stage, a set of variations composed in 1759 and based on ‘La ci darem la mano’ from Mozart’s Don Giovanni. He continues with two more attractive variation sets and then a striking scena for piano, cello and voice, Il sogno, to a text by Guacci, with the obbligato cello part transcribed here for flute. Another rarity is the 15-minute instrumental-only scena, La Smania, while the remaining pieces are more abstract in form, ending with a substantial four-movement Trio for the unusual scoring of flute, flauto d’amore and cello.

Father of Ginevra Petrucci, flautist on several critically acclaimed Brilliant Classics albums, Gian-Luca Petrucci is a Mercadante specialist who plays the starring role here, and writes the invaluable booklet essay. He has played principal flute with several major Italian orchestras, toured widely and published monographs on composers including Mercadante. He is also professor of flute at the Accademia della Santa Cecilia in Rome. Gian-Luca Petrucci is joined here by friends and colleagues from across Europe to celebrate the under-rated art of Mercadante.

Saverio Mercadante (1795-1870) was one of the most important opera composers of 19th century Italy. Nurtured on Neapolitan soil he soon gained success all over Italy, where his operas were praised for their strong dramatic impact and brilliant orchestration, a link between Rossini and Verdi.
Mercadante wrote 60 operas, symphonies, concertos and a vast body of chamber music. This new recording presents works in which the flute is the soloist: flute duets, a trio for flute, viola d’amore and cello, and variations for flute and string trio, as well as several works for flute and piano. All these works show a personal language that blends a taste for lyricism with the pleasure of instrumental bravura.
Gian-Luca Petrucci has been first flute in several of the top orchestras of Italy. He was professor at the Santa Cecilia Conservatory in Rome. As a scholar he published monographs on several (Italian) composers: Mercadante, Briccialdi, Gazzelloni, de Lorenzo and …Mozart.
More Less