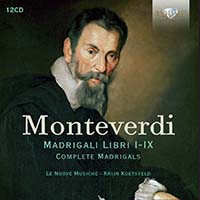 A project 10 years in the making, now issued complete for the first time: a landmark in Monteverdi performance.

The Dutch musician Krijn Koetsveld has often conducted Bach, and he was founder-director of The Netherlands Bach Ensemble. However, it is the name of Claudio Monteverdi with which he is indelibly associated: he first encountered the composer’s music in 1972, and describes it as ‘love at first sight, which never passed’.

This relationship matured over time into the foundation of a soloistic vocal group, Le Nuove Musiche, with the technical skills, the scholarly understanding and the musical sensitivities to do justice to the highly intimate, sophisticated genre of Renaissance madrigal, of which the ninebooks by Monteverdi represent its summit and fullest flowering.

Recording all nine books, and several other mini-dramas and vocal chamber works which fall within the genre but outside the books themselves, began in 2004 and was only completed in 2018. Koetsveld contributes a lively and authoritative introduction to the whole project in the booklet. He remarks: ‘Nine books of madrigals, all of them unique, contributing to the transition from the Renaissance to the baroque, a musical history in sound.’

As the series has been released, its importance has been widely recognised in the critical press. In 2017, Fanfare observed: ‘Il Combattimento di Tancredi e Clorinda is representative of Koetsveld’s approach. The harmonic outline of the continuo is restrained and precise, the tutti playing of the strings articulated clearly. Both instrumental and concerted textures are so transparent one could take dictation to the recording. In a luminous performance as the narrator, Falco van Loon is focused and crystalline; Wendy Roobol is a clean, nimble Clorinda. Arnout Lems is the most dramatic of the soloists, voicing Tancredi in a rich but gentle baritone.’

More from Fanfare: ‘Decidedly expert performances [make Koetsveld’s Monteverdi an] eminently valuable reference recording.’ ‘The budget price cannot be overlooked, but it is not a measure of the exceptional value of Koetsveld’s accomplishment.’

This set presents the complete recording of all nine books of Madrigals by Claudio Monteverdi, as performed by Le Nuove Musiche conducted by Krijn Koetsveld.
In these madrigals, written over the complete life span of the composer, we can follow the transformation of music history, from the “prima prattica” to the “seconda prattica”, from madrigal to opera, from old school polyphony to daring drama, the liberation and expression of human emotion in works of heart wrenching beauty.
The vocal ensemble “Le Nuove Musiche” is an elite group of the best vocalists of the Dutch Early Music scene. Conductor Krijn Koetsveld is a highly respected keyboard player (harpsichord/organ), conductor and scholar. The previously released single issues have met with great international acclaim: “5 stars” (Volkskrant), “A polished, well-balanced sound.. consistently musical and intelligent” (Early Music), “Again a convincing issue…excellent throughout” (Klassik.com), “Performance: 10. …an .incredibly beautiful, excellent recording..”(Dutch magazine Luister).

"Le Nuove Musiche easily withstands the comparison with most renowned ensembles in this particular repertoire. We hear it all: great singing talent, strong imagination, pure textual fidelity and diction, sharp-edged articulation in addition to a smooth phrasing, the ever-rhythmic rhythm with its striking stakes and that perfect sense of balance. Not a moment of dullness, no creeping routine, no flat instrumental accompaniment, no contrived effects such as the often ineradicable and often disturbing vibrato, in a story that flows with countless fascinating shades, of an extremely detailed wealth as if from an almost inexhaustible source and in a sublime recording framework. All of this must put the listener on the tip of his chair! (Aart van der Wal on www.opusklassiek.nl, April 2018) read the entire essay here: -->
https://www.opusklassiek.nl/cd-recensies/cd-aw/monteverdi15.htm