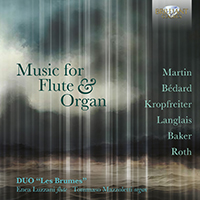 A unique recital on record, for a hauntingly beautiful instrumental combination, featuring several first recordings.
The duo of trumpet and organ is a well-established one, having attracted composers from the early Baroque period onwards. The combination of flute and organ, while requiring careful balancing so that the organ does not overwhelm the flute, is no less attractive in its way, and has drawn from composers a more varied palette of expression. This new album is made by a duo of Piedmontese musicians who have explored the riches of the flute-and-organ repertoire to come up with a balanced selection of pieces written by 20th- and 21st-century composers on both sides of the Atlantic.
Duo les Brumes begin with an undoubted masterpiece: the Sonata da Chiesa which the Swiss composer Frank Martin originally composed in 1939 for viola d'amore and organ. Because his Dutch wife Maria Boeke was an excellent flautist, he also produced a version for flute and organ in 1941. The sonata’s three sections enclose a sequence of gentle, neoclassical dance movements between two reflective slow movements. The album’s other substantial work is Ain Karim, a fantasia composed in 1995 by the Swiss organist-composer Daniel Roth. Aïn Karim is the name of the place near Jerusalem where Mary, mother of Jesus, is thought to have visited her cousin Elisabeth and spoken the words of the ‘Magnificat’. Daniel Roth has taken part of this text ('He puts down the mighty from their seat and exalts the humble and meek') to emphasise the contrast between the ‘small’ flute and the ‘monumental’ organ.
In between, Duo Les Brumes present a gallery of vividly coloured miniatures: a suite of Four Pieces composed in 1962 by the Austrian composer Augustin Franz Kropfreiter (1936-2003), within the same kind of ‘modern neoclassical’ vein as Martin’s Sonata da Chiesa; then Five Pieces by Jean Langlais, more extrovert in character. Two Canadian composers are also represented with the radiant, soaring Melodia by Denis Bédard and the Elegy by Michael Conway Baker.

- The combination of flute and organ is an especially happy one, the attractive, melodious quality of the flute blends perfectly with the harmonious and sonorous colours of the organ.
- This program presents works originally written for flute and organ: works by Frank Martin, Jean Langlais, Daniel Roth, Denis Bédard, Augustin Kropfreiter and Michael Conway Baker.
- Recorded on the Brondino Vegezzi-Bossi organ at St.Paul protestant church in Gland, Switzerland by Tommaso Mazzoletti (organ) and Enea Luzzani (flute). The organ boasts of such special registers such as Coro Viole or Coro violins, oboe d'amore and orchestral clarinet. The organ’s full specifications are included in the booklet.
More Less