Music for Guitar and Choir by Castelnuovo-Tedesco, Campogrande & Jappelli 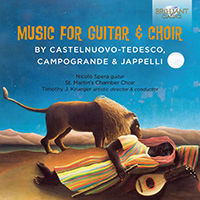 A pair of world-premiere recordings on a unique collection of works conceived for an unusual, highly-appealing combination of musicians.

The technical challenging of balancing a choir singing at full volume and a guitar, renowned for its gentle sound, has tended to discourage composers from pairing these resources. Handled sensitively, however, the combination yields a seductive sound-world, full of mystery and imagination, tending in this trio of works to evoke a reassuring feeling of familiarity: there is balance, a sense of form, awareness, and respect for a past that is renewed while it nourishes the present.

At the peak of his maturity in 1959 and in a burst of creativity, Mario Castelnuovo-Tedesco set to music seven poems by Federico García Lorca as a cycle, Romancero Gitano Op.152. The vocal writing is limpid, capturing the colours and contrasts of Lorca’s text, whether it is representing the placid flow of three rivers (Baladilla de los Tres Rios) with an incessant stream of semiquavers, or depicting Carmen’s dance through the streets of Seville with an elegant and slightly grotesque “Tempo di Seguidilla” (Baile). Everywhere, what shines through, to quote the composer, is a sense ‘of the Spanish lands: the parched Castile, the pale olive groves, the scent of the orange orchards in Andalusia and, along the coast, the sea which breaks at the shore with vibrations, almost, of a guitar.’

Receiving their first recordings here are Nulla Sors Longa Est by Nicola Jappelli (b.1975) and Materna by Nicola Campogrande (b.1969). Jappelli’s chosen text was written by the Roman philosopher Seneca, and addresses the concept of happiness, ending with a bitter reflection on human frailty. Campogrande’s piece has a more positive outlook, celebrating motherhood in a commission from the
guitarist on this recording, Nicolò Spera, to mark the birth of his daughter. Campogrande has set four texts – also in Latin – by the contemporary poet Marco Vacchetti, who was in turn inspired by Renaissance-era nativities painted by Piero della Francesca, Caravaggio, Luini and Solari. These pictorial representations of the experience of maternity and infancy, as seen through their gestures and rituals, have a tenderness and intimacy to which any sympathetic listener will respond.

Born in Italy but now based in the US as a professor of guitar at the University of Boulder, Colorado, Nicolò Spera is one of the few guitarists in the world to perform on both six-string and ten-string guitars, as well as on theorbo. In 2013, he founded the University of Colorado International Guitar Festival and Competition, an unprecedented event that attracts prestigious guests, guitar performers, and students from all over the world. This release marks his debut on Brilliant Classics.

This fascinating new recording presents three Italian works for the unusual combination of guitar and choir.

The earliest, and in fact the first ever, composition for guitar and choir is the suite Romancero Gitano, by Mario Castelnuovo-Tedesco, on poems by García Lorca. To quote the composer: “that sense of the Spanish lands: the parched Castile, the pale olive groves, the scent of the orange orchards in Andalusia and, along the coast, the sea which breaks at the shore with vibrations, almost, of a guitar.”

“Materna” by Nicola Campogrande is an ode to maternity. It is a musical polyptych about maternity based on original Latin texts written by Marco Vacchetti and organized in four panels, which themselves were inspired by masterpieces of Italian art between the Renaissance and early Baroque periods. For Nulla Sors Longa Est, Nicola Jappelli turns to the world of the classics, using three fragments from Seneca.