Home > Catalogue > Music for the House of a Gentleman

Music for the House of a Gentleman 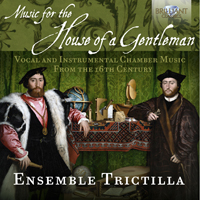 The aim of this collection is to provide listeners with a broader understanding of how music was conceived during the Italian Renaissance, beyond the usual focus on vocal works, whether sacred or dramatic. Libraries have been ransacked to find unusual examples of solo repertoire for violin, lyra da braccio, keyboard, harp and lute, but also solo ricercars, 4-part dances, and arrangements of the vocal scores of madrigals. The wide range of pieces that make up the recording give an eloquent idea of the music that would have been played and heard in the home of an Italian gentleman.

Cosimo Bartoli, a Florentine gentleman and writer, explained that a gentleman should make use of music "as a recreation for the spirit, with the modesty and courtesy expected of noblemen and those of elevated birth, indeed I believe and am sure that this is not just admirable, but also expedient: I would even go so far as to call it necessary." And who would argue with him?

Towards the end of the 1500s, music for dancing also increased in popularity, though in contrast to what went on outdoors in the streets, the dances were performed with great elegance and refinement: composers adopted typical folk dances such as the Ungarescha or the Schiarazula Marazula reshaping them and investing them with the musical dignity befitting a patrician audience.

Thus presented here is a scholarly collected but skilfully performed combination of solemn ricercars, instrumental settings of yearning madrigals and more exuberant dances, often by names almost unknown now such as Ascanio Mayone and Francesco Taeggio, but well worth discovering alongside their more storied counterparts such as Lassus and Arcadelt. Several of the performers here have already made well-received recordings for Brilliant, such as violinist Valerio Losito and keyboard player Giulia Nuti.

The programme of this CD conjures up the salon of a 16th century Italian mansion, in which the master of the house is entertaining his guests to the “gentle” (that is noble, gracious, courteous) art of music making. Music was an important part of social life of the gentry, and musicians were often employed by the nobility.
The programme consists of an alternation of instrumental and vocal music, by composers like Lasso, Arcadelt, Ortiz, Spinacino, da Milano, and others. The instruments used are baroque violin, lyra da braccio, harp, lute, recorder and harpsichord.
A fascinating concept recording by baroque violinist Valerio Losito, who already recorded several successful CD’s for Brilliant Classics (Veracini, Tessarini, Domenico Scarlatti, music for viola d’amore solo). Soprano Lucia Sciannimanico sings the vocal parts, a beautiful and warm voice, specialised in the Renaissance and Baroque repertoire.
Excellent liner notes written by the artist.
More Less