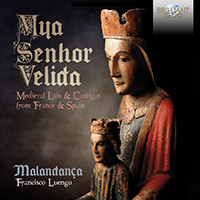 These medieval cantigas and lais – troubadour compositions from Galicia and France, respectively – display an innovation of the 12th and 13th centuries: themes of courtly love and Marian devotion combined, at once carnal and mystical, encompassing both the profane and the divine.

The two lais on this recording are found in a manuscript songbook known as the Noailles Chansonnier from c.1300. In the anonymous Plainte de la Vierge au pied de la croix the Virgin Mary speaks in first person in a figurative lament at the foot of the cross. The Lai de Notre Dame, attributed to 13th-century troubadour Ernoul ‘Le Vieux’ or ‘Le Vielle’, begins with the author’s promise to keep faith with the Virgin Mary and serve no other woman, a pledge quite reminiscent of those of Alfonso X of Castile in his Cantigas de Santa Maria, one of the largest collections of monophonic songs from the Middle Ages.

The Cantigas, attributed to King Alfonso X (1221–1284), were written in early-Medieval Galician-Portuguese, fashionable as a lyrical language in Castile at the time. In Santa Maria loei, e loo e loarei, the king thanks the Virgin Mary for her kindness and protection. Nenbressete, Madre de Deus deals with Mary’s role as mediator – in medieval eyes, her primary function. It was composed as a contrafactum on Recordare (an antiphon for the offertory sung in the Feast of Mary Mediatrix, also recorded here), translating the antiphon into Galician-Portuguese and expanding it with new musical and poetic concepts.

Virgen Madre groriosa, a contrafactum on the estampie ‘Reis Glorios’ by French troubadour Giraut de Bornelh, binds this album together, demonstrating the relationship between the Galician-Portuguese and French lyrics.

To the members of Malandança, medieval music is a field in which both performance and scholarship are unavoidable and interdependent subjects. Research conducted by Francisco Luengo and others into sculptures depicting medieval instruments has opened up a world of sounds, ideas, images and voices from the distant Middle Ages.

This fascinating program features 12th and 13th century music for the Virgin Mary, as sung by medieval troubadours. Central theme is Courtly Love, in its profane, carnal manifestation and in its divine, spiritual manifestation. The music originates from Galicia and France, and is sung in “Lais” and “Cantigas”, long narrative compositions consisting of stanzas and variable verses. The first Lai that opens this recording is titled Plainte de la Vierge au Pied de la Croix, in which the Virgin Mary speaks in the first person at the foot of the cross, lamenting her fate in strong theatrical language.
The “Cantigas de Santa Maria” is a collection related to the court of King Alfonso X, featuring the miracles that the Virgin Mary has done to the King and others seeking her divine help. Malandança is a Spanish group specializing in performing Spanish medieval music. The musical instruments used are scholarly reproductions of those depicted in sculptures on the Portico of Glory at Santiago de Compostela Cathedral and in sculptures on the corbels of the Xelmírez Palace, Santiago de Compostela.
More Less