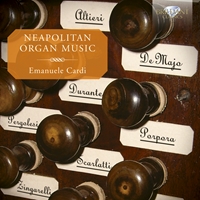 From the 17th to 19th centuries Naples was counted among the European capitals of music; traditions of both composition and performance were fostered, supporting a local culture that was hungry for music, and the city’s conservatoires started to produce musicians who occupied positions of prestige both in their home city and at the courts and theatres across the continent.

Out of the recently founded ‘Neapolitan School’ came a wealth of celebrated composers as well as the gradual romanticisation of the organ, which acquired new ‘concert stops’ in addition to a complete pedalboard; this release focuses on bringing to light the variety of music that started to be written for the newly improved instrument. As well as including the esteemed names of Pergolesi, Scarlatti and Durante, the recording takes in contemporaries whose music proves no less lively or elegant: from Porpora, particularly famed for his vocal music, to de Majo, from Alitieri to Zingarelli, the latter of whose sonatas reflect the prevalent style galante, the lively and brilliant style of the works draws attention to the then dominance of operatic culture across all musical genres.

The pieces are performed by keyboardist Emanuele Cardi, a Renaissance and Baroque specialist who also takes an active interest in the restoration of ancient organs. The recording was made in the Church of San Nicola di Bari in Italy, whose 1889 Giuseppe Picardi organ faithfully reflects the stylistic evolution detailed above.

Other information:
- Recorded 27–28 January 2013.
- A fascinating picture of musical life in Naples in the second half of the 18th century. Naples was then one of the musical capitals of Europe, housing a wealth of musicians, composers and an audience hungry for new music.
- The new style, as introduced by composers like Pergolesi, Scarlatti and Durante was a brilliant mixture of elegance, wit and the innate Italian flair for a good tune.
- Organist Emanuele Cardi finds the right sunny touch on the historic Giuseppe Picardi Organ (1889) in Bari, Italy.
Booklet contains information on the works, the organ and the artist.
More Less