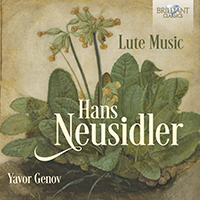 A cultural map of Europe during the Renaissance would have looked quite different to one drawn in the present day. Individual artists and artistic schools brought fame to their place of origin, a noteworthy example being Mantua, home of the Gonzaga family who commissioned Orfeo from Monteverdi. North of the Alps, the city of Nuremberg became famous for its association with Albrecht Dürer, and its cultural life nurtured and supported a healthy tradition of lute making and lute playing in which the figure of Hans Neusidler played an instrumental role. Neusidler was a true pioneer of the lute, who masterfully adapted the language of the great Franco-Flemish polyphonists to his instrument. Born in 1508 in the prosperous Hapsburgian centre of Pressburg, today the Slovakian capital, Bratislava, Neusidler enters the historical record with his move to Nuremburg in 1530, where he married, became a citizen and bought a house. In 1536 the first of what would be a series of eight volumes of lute music was published under his name (the last of them appearing in 1549).

Neusidler divided this first lute book of 1536 into two parts: for beginners and advanced players. Yavor Genov has selected from the latter pages of the book for this album, which has among its most singular features a treasury of dazzling intabulations of chansons by famed composers of the day such as Josquin, Ghiselin and Isaac. Besides his technical skill at transforming vocal music into lute pieces Neusidler demonstrates notable ingenuity in his free-form preambels: brief, original, ‘abstract’ compositions that move fluidly between canonic imitation, imitative sequences and homages to the older faux-bourdon style of Dufay and other late-medieval masters. The third principal stylistic component of the book is the dance form. Pieces designated as Tan[t]z/Tenzlein are probably based on vocal tunes or on a ground, and often move from double metre to a second section in triple metre (called Hupff auff).

Hans Neusidler (1508-1563) was born in Pressburg (today Bratislava, Slovakia) and first enters the historical record in 1530, when he settled in Nuremberg, Germany. He taught lute there in the 1530s, publishing eight books of lute music between 1536 and 1549, and also went into business as a lute maker by 1550.
Neusidler was one of the most important early German lutenists. His eight publications feature intabulations of German songs, French chansons, Italian madrigals, dance pieces, and preludes of an improvisatory nature. Most of the works are in three parts, but there are two-part pieces for beginners and a few four-part arrangements in two of his publications.
Lutenist Yavor Genov presents on this CD a selection of works by Neusidler, emphasizing his significance as one of the most prominent and bright lutenists of his generation, but also as one of those instrumentalists, who successfully adopted the contrapuntal musical language of the great Franco-Flemish school to the lute playing.
Yavor Genov is a lutenist and basso continuo player. His three solo CDs for Brilliant Classics – “Orpheus Anglorum” (2018), “Zamboni – lute music” (2014) and “Kapsberger – Libro primo di lauto” (2013) have received international critical acclaim. He has collaborated with musicians like Dame Emma Kirkby, Núria Rial, Andrew Lawrence-King, Lars Ulrik Mortensen and Teodor Currentzis. Yavor has studied early plucked instruments and basso continuo with Jakob Lindberg.