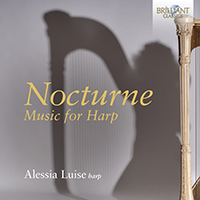 A meticulous, focused search for sound informs the selection of pieces on this recital, a voyage through 19th-century European music, in the vehicle of the nocturne, along the route of harp transcriptions. In these works, the composers capture night as a sliver of time, evoking the intimate and introspective side of the Romantic spirit. Night is also a metaphor for transformation, from darkness to light, for transcription from one musical instrument to another.

For this ‘reduction of a big thought to a practical instrument’, as Ferruccio Busoni put it in 1913, the harp was a popular choice, particularly in the late 19th century, when the instrument’s repertoire was augmented by a number of excellent transcriptions and reductions by renowned harp teachers and performers.

Beethoven’s ‘Moonlight’ Sonata provides the ideal starting point for a sonic journey through the light and dark of the Romantic spirit. Czerny’s short arabesques, Der Abend und die Nacht, continue the theme of twilight and night-time fantasy. Irishman John Field did not invent the nocturne, but he was responsible for the ‘crystallisation of an idiom’ that, a generation later, Chopin would take to new heights. The second movement of Brahms’s Piano Sonata No.3 evokes a nocturne, but on a larger scale. In the score is an epigraph with several verses by the poet C.O. Sternau hinting at a night-time embrace between two lovers. Debussy’s Clair de lune envelops the listener in a night freed from traditional formal structures, providing a brief escape from the 18th-century style of the preceding movements. His Nocturne in D flat, on the other hand, transports us back to Romanticism, its mysterious bass octaves and tender arpeggios leading to a melody of expansive, Chopinesque lyricism, which stands out above the changes in harmonic colour. With its pure, abstract sonority the concise Les Soirs illumineìs par l’ardeur du charbon presents night as verging on silence: the deafening quiet of a cold winter evening during World War One, when the anguish of the present is mixed with gratitude for a shipment of fuel, expressed in Debussy’s gift of the manuscript (rediscovered in 2001) to the coal merchant Monsieur Tronquin.

Other information:
Recorded in September of 2020, Vicenza, Italy
Bilingual booklet in English and Italian contains notes on the works by musicologist Tiziana Affortunato and a biography of the artist
Alessia Luise plays an Iris model Salvi harp
More Less