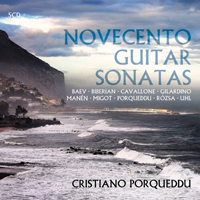 Pioneering guitarist Cristiano Porqueddu follows his fascinating set of Novecento Guitar Preludes – released on Brilliant Classics in 2012 and hailed by MusicWeb International as ‘a most compelling collection [where] the guitar is placed on a par with other classical instruments: something to be treated seriously’ – with this equally intriguing selection of 20th-century guitar sonatas. Featuring a wealth of world premiere recordings, the collection is yet another showcase for Porqueddu’s spirit of adventure.

Once again, Porqueddu takes us on a colourful journey that passes through all kinds of different styles and moods: from Gilbert Biberian’s fusion of traditional formal structures with the dance and folk music of the Middle East to Franco Cavallone’s four sonatas that are inspired by such diverse influences as Ravel, Ponce, Bernstein and the 20th-century Italian composers Frazzi and Lupi; from Angelo Gilardino’s evocative sonatas that recall great Italian paintings and warm Mediterranean winter days to Georges Migot’s refined and virtuosic sonata, to name just a few examples. And one of the many world premiere recordings featured here is an exciting new sonata by Porqueddu himself.

Cristiano Porqueddu, described as "a point of reference for the new generation of guitarists", graduated from the Lorenzo Perosi International Academy in Biella, Italy. With an extensive knowledge of the technique and interpretation of 19th- and 20th-century music, he has won numerous international awards and now sits on the jury of several major guitar competitions. Porqueddu has made many acclaimed recordings for Brilliant Classics.

Other information:
- A fascinating survey of 20th century sonatas written for solo guitar, including 13 world premiere recordings.
- Another great and original project of guitarist Cristiano Porqueddu, “a point of Reference for the new generation of guitarists”, bringing together a wide range of guitar sonatas by Baev, Biberian, Porqueddu, Cavallone,Manén, Migot, Gilardino, Rózsa. A journey through wildly differing styles, from Impressionism to Expressionism, from the simple to the complex, from the folkloristic and descriptive to absolute music.
- “A most compelling collection placing the guitar on absolute par with other classical instruments-something to be treated seriously”, wrote Musicweb about Porqueddu’s collection of Novecento Guitar Preludes, and that applies also to this new set of sonatas, an important collection for scholars, guitarists and music lovers alike.
- Booklet features extensive work-by-work liner notes and artist biography.
More Less