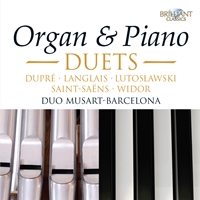 The combination though of organ and piano may strike one as an odd one. The organ for hundreds of years had been the musical voice of the church, and later in the 19th century had become popular in large concert halls. The piano was the must have instrument in middle class homes. However, in the middle of the 19th century a new small organ, the harmonium became available, and many bourgeois homes had one in addition to the piano. The repertoire for piano and harmonium began to grow as composers cashed in on a rapidly growing market in domestic music making.

The Dupre was composed with a concert hall organ in mind, and cannot be termed salon music at all. He composed this work to mark the death of Glazunov who had dedicated his Fantasie for organ op110 to Dupre.It is a dazzling work topped off with a spectacular fugue. Lutoslawki’s Variations on a theme by Paganini was composed in Nazi occupied Ploand in 1941. Originally for two piano, he later orchestrated it, but in this arrangement for organ and piano his flawless musical technique is given a new life.

Other information:
• Recorded in 2010
• Unusual repertoire, and of interest to all organ music fans
More Less