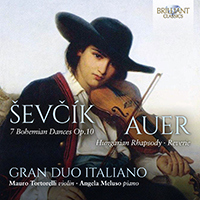 With this recording the Gran Duo Italiano showcases one of the pillars of modern violin performance that receives little if any attention today: the great composer–teacher–violinists active at the turn of the 20th century and the violin ‘schools’ that emanated from their exemplary violin techniques and interpretive practice. Such musicians, even before establishing themselves as master teachers, were both talented solo performers and members of leading chamber ensembles. Two violinists from this period who stand above the rest are Leopold Auer (1845–1930) and Otakar Ševčiìk (1852–1934). This project investigates and rediscovers concert compositions written by these virtuosos.

The common thread in their writing is a vibrant romanticism, dominated, of course, by their own instrument, the violin. The form and harmony pursued in these compositions sought to highlight the violin’s bel canto attributes and draw on the performer’s full range of technical skills.

Auer’s limited oeuvre reveals an impressive talent for composition. His Rhapsodie hongroise Op.5 was dedicated to Pablo de Sarasate, and its relatively free structure affords soloists the opportunity to display their full technical prowess with both the left hand and the bow in writing clearly inspired by Paganini featuring flying picchettati, rapid demisemiquaver flourishes, G string passages, chromatic scales in thirds, and harmonics. His Rêverie Op.3 in G is couched in intense lyricism, as is the extremely refined Rêverie No.2 in E flat. His Tarantelle de concert Op.2, in which double-stopped thirds play a starring role, is bright and virtuosic in both the first and final sections, with a contrasting romantic, expressive central part.

Ševčiìk’s Českeì tance e piìsně Op.10, published in 1898, was the final work in his first creative phase, known as his ‘Russian period’ (1875–1892). A native of Bohemia, he was feeling homesick in Russia and wrote these Dances to cheer himself up. The cycle initially comprised six pieces, each displaying virtuosity on a par with Paganini. Later (in 1928) a seventh dance was added and given the opus number 10a.

- This new recording presents two famous violinists who were equally important teachers and composers as well: Leopold Auer and Otokar Ševčík.
- Leopold Auer was born in Veszprém/Hungary. He became one of the most celebrated violinists of his time, whereas he counted among his pupils Efrem Zimbalist, Jascha Heifetz, Mischa Elman and Nathan Milstein.
- Otokar Ševčík was born in Bohemia. After a long solo career as a violin virtuoso, he became a sought-after teacher (he taught in Salzburg, Vienna, Prague, Kharkiv, Kiev, London, Boston, Chicago, and New York), conductor, composer and above all the author of a new method in 26 volumes which revolutionized the history of violin teaching throughout the world. Together with Leopold Auer, Joseph Joachim, August Wilhelm and Carl Flesch, Ševčík belongs to the giants of teaching who influenced the violin tradition worldwide in the 19th and early 20th century.
- This new recording presents works for violin and piano of Auer and Ševčík, highly attractive music, inspired by their own cultural background, and exploiting the possibilities of the violin to the extreme limits.
- Played by Mauro Tortorelli (violin) and Angela Meluso (piano), whose previous recordings for Brilliant Classics (Saint-Saëns, Milhaud, Castelnuovo-Tedesco, Scalero) were highly praised in the international press.

Other information:
- Recorded in April 2009 in Naples and October 2020 in Polla (Salerno), Italy
- The bilingual booklet contains liner notes by musicologists Renato Ricco (Auer) and Gabriela Drasarova (Ševčík), as well as a biography of the artists
More Less