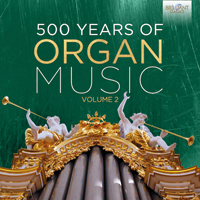 The first volume of 500 Years of Organ Music (95310) plunged us into the world of a majestic instrument which has been a formidable presence in churches and cathedrals for thousands of years. In this new anthology we delve deeper into the vast soundscape, discovering an eclectic range of composers and their equally varied works for what Mozart once described as ‘the king of instruments’.

Much of the oldest organ music has been lost or destroyed. However, to this day in institutions and libraries around the world ancient manuscripts are still discovered languishing on cobwebbed shelves, and the music’s fragments are painstakingly pieced together, allowing new works to come to light. For instance, we are introduced to Gonzalo de Baena, whose collection Newly devised method for learning to play, dating from 1540, was only rediscovered in 1992. Other Renaissance-era highlights include Italian virtuosi Cristofano Malvezzi, Giovanni Maria Trabaci and Antonio Valente, whose works offer an insight into the era’s musical traditions, with parallel triads and typically highly ornamented melodies.

Encompassing a range of European contributions, the anthology also features Spanish early music and particularly the tiento. Deriving its name from tentar ‘to touch’, the tiento is Spain’s answer to the Italian ricercar. The style is exemplified by Francisco Correa de Arauxo’s Libro de tientos y discursos de música practica, published in 1626, and its pieces set the stage for the Spanish Baroque era.

Among the German composers, the set includes Johann Caspar Kerll, a highly-respected composer in his day whose works were studied by Handel and J.S. Bach. He is virtually forgotten today, but receives due credit here with a full CD dedicated to his canzone and toccatas. Naturally, a survey of the German organ music repertoire is not complete without the contribution made by the Bach family, and seven members of the family, including J.S. Bach, grace this set.

The Classical era witnessed a decline in organ music as composers became increasingly enamoured by the instruments in the piano family. That being said, manuscripts of ‘keyboard’ works are ambiguous as to whether they were intended for harpsichord, fortepiano or organ. Domenico Cimarosa was the organist at the Neapolitan royal chapel and later was employed by Catherine the Great at the imperial in St Petersburg. Described by Sstendhal as ‘the Molière of composers’, his keyboard works are performed here on the organ, giving them a rich timbre and deepness.

In the 19th century the rise of secularism led to an increased demand for public concerts. Freed from its traditional duty in the church, organ music once again flourished as composers and performers displayed their virtuosity and technical skill. More recent contributions to the organ music repertoire draw on the rich history of the instrument, but with room for experimentation. Flor Peeters was heavily influenced by Gregorian chant and Flemish polyphony, yet the complex polytonality and contemplative nature of his works aspire to a new sonic dimension.

This collection is an immersive experience and celebrates the versatility of the organ as a voice for myriad composers and styles throughout history. Played on some of Europe’s most finely crafted and awe-inspiring organs by acclaimed performers, this set will be relished by any enthusiast.

Following up on the great success of the first volume of “500 Years of Organ Music” (Brilliant Classics 95310) Brilliant Classics is happy and proud to launch this second volume of 50 CDs, presenting an unprecedented number of organ composers, not one work of them present in the previous box, a survey of immense scope, variety, quality and historical importance.
Like its predecessor the box is in chronological order, starting off with the Renaissance (Antegnati, Pellegrini, Bonelli, Gabrieli a.o), continuing through the Baroque (Zipoli, Pachelbel, Krebs, Lübeck, Marcello a.o.), the Classical Period (Spergher, Cimarosa, Valeri, Galuppi) the Romantic Period (Rheinberger, Merkel, Liszt, Mendelssohn, Poncielli, Fumagalli a.o.) to the 20th century (Messiaen, Ligeti a.o.). The best organists of our time play on a wealth of historic or newly built organs, all perfectly suited to the music played on them. A fitting and unbeatable tribute the the “King of instruments”!