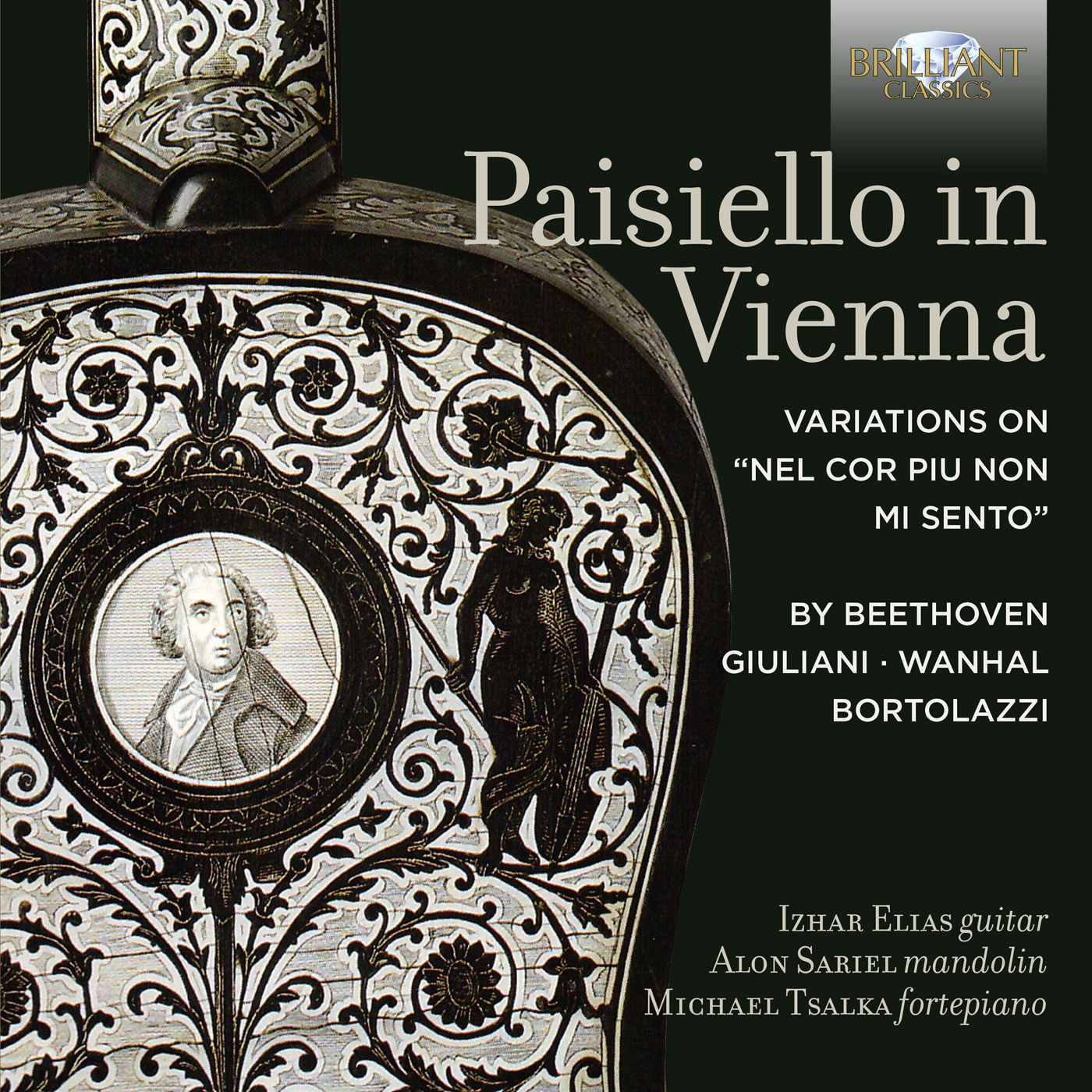 This ingeniously programmed conceptalbum contains no original music by Paisiello but rather presents a selection of
works which take as their inspiration his best‐known aria. ‘Nel cor più non mi sento’ is a duet from his 1788 opera L'amor
contrastato, ossia La molinara – generally referred to as La molinara and, in an intriguing twist of history, translated in to
German as Die schöne Müllerin. But in fact Schubert is one of the few noted variationcomposers absent here. Paganini’s later set of variations is a staple of the virtuoso‐violin repertoire, but this enterprising trio of musicians have looked to lesser‐known treatments of the duet, which attained great popularity on account of its simple but winning melody, so suitable for elaboration. Bortolazzi was well-known in his day as a superb mandolin player, and composed prodigiously for his
instrument just as Mauro Giuliani did for the guitar, with an intimate understanding of its technical and expressive possibilities. Wanhal’s variations were originally composed for a melody instrument such as violin or flute, but it has been arranged specially for the trio here. Beethoven’s piano‐only variation set is relatively well‐known and has been recorded many times, but the smaller works for mandolin and fortepiano are no less engaging and have received little attention:
this period-instrument performance almost has the field to itself. Michael Salka plays an original 1820 Böhm fortepiano, Alon Sariel an 1850 mandolin and Izhar Elias a Guadagnini guitar from 1812, less than two decades after the works recorded here were composed. This fascinating release is completed by Hummel’s ‘Grande Sonata’ for mandolin and piano and an extensive Potpourri for guitar and piano, which gathers
up several themes from hit operas of the day, not including ‘Nel cor più non mi sento’.

This original concept CD presents one of the most popular opera arias in early‐19th century Vienna, “Nel cor piu non mi sento”, from Paisiello’s opera L’amor contrastato, as the basis of variation works by a variety of composers: Bortolazzi, Hummel, Giuliani, Wanhal and Beethoven. The aria, in its powerful simplicity, lends itself very well for the variation form and it was gratefully used as a means of instrumental display of brilliance
and invention.
The basic instrumental ensemble used on this recording is mandolin, guitar and fortepiano, fashionable instruments at that time. The musicians play on historic instruments: Alon Sariel plays a 1850 mandolin, Izhar Elias plays a 1812 Guadagnini guitar and the Böhm 1820 fortepiano is played by
Michael Tsalka.
The excellent liner notes are written by the musicians.
More Less