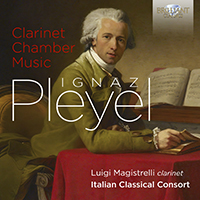 Ignaz Pleyel (1757–1831) was one of the most multifaceted artists of all time, being active in various fields as a composer, performer, publisher and piano builder. Born in Lower Austria, he became the pupil of Joseph Haydn in Eisenstadt, who considered him to be a superb student. In 1791, due to the French Revolution, musical performances in churches and public concerts were abolished, so Pleyel travelled to London searching for a better place to work as a composer and organiser. He later moved to Paris, where he founded his publishing house and published around 4000 works in 39 years, including compositions by Beethoven, Clementi, Mozart and Onslow. Pleyel was a quite prolific composer, writing at least 42 symphonies, 70 string quartets and several operas. Recent scholarship has suggested that the theme for the St. Anthony Variations [on a Theme by Haydn] Op.56a by Johannes Brahms was probably composed not by Haydn but by Ignaz Pleyel.
The beautiful and cheerful Quintet in C for piano and winds is in a pleasant, early-classical Viennese style, reminding us of the previous masterpieces for the same medium by Mozart and Beethoven. An arrangement for Wind Octet of this work is preserved at the Fürstlich Fürstenbergische Hofbibliothek Donaueschingen in Germany. The manuscript of the Due Duetti for clarinet and viola has so far never been published. This is interesting, as this seldom used instrumental combination creates a very effective sound, thanks to the complementary warm timbres of the two parts.
The Trio Op.20 No.1 for two clarinets and bassoon is an arrangement from one of Pleyel’s flute and string trios. The two short songs Behind yon Hills and The smiling Morn, from the Original Scottish Airs, are originally for soprano and piano, but the clarinet replaces the singer with a similarly expressive and beautiful result.
The Variations in F on a Theme of Pleyel is a piece arranged for three clarinets by Antonín Myslík, taken from the Quartet in F by Franz Krommer (1759–1831). Mozart praised Pleyel’s compositions in a letter written to his father. A reviewer writing in the Morning Herald of London (1791) said that ‘Pleyel is becoming even more popular than his master (Haydn), as his works are characterized less by the intricacies of science than the charm of simplicity and feeling’. This statement defines the character of the music on this album, all pieces that can offer maximum enjoyment to the listener.

Other information:
- Recorded July–August 2022 in Milan (MI) & Lombardy (MB), Italy
- Booklet in English contains liner notes by the clarinettist, and biographies of the artists

- Ignaz Pleyel, one of the most multifaceted composers of any time, being active in various fields as a composer, performer, publisher and piano builder. He was born in Lower Austria, he studied with Johann Baptist Vanhal, and from 1772 he became the pupil of Joseph Haydn in Eisenstadt, who considered him to be a superb student. After that he became a publisher in Paris (Maison Pleyel).
- In 1791, due to French Revolution musical performances in churches were abolished as well as public concerts and Pleyel travelled to London searching for a better place to work as a composer and organizer. In fact he made a fortune during his stay in that city, where he also led the "Professional Concerts" organized by Wilhelm Cramer. Finally he settled in Paris where he founded his publishing house which lasted for 39 years and published about 4,000 works during this time, including compositions by Adolphe Adam, Luigi Boccherini, Ludwig van Beethoven, Muzio Clementi, Johann Baptist Cramer, Johann Ladislaus Dussek, Johann Nepomuk Hummel, Wolfgang Amadeus Mozart and Georges Onslow.
- In 1807 he became a manufacturer of very fine pianos, which industry continues till today. Pleyel was a composer, writing at least 42 symphonies, 70 string quartets and several operas.
- This new recording presents chamber music in which the clarinet plays a leading role: a beautiful Quintet for piano, oboe, clarinet, horn and bassoon, duos and a trio for clarinet(s), bassoon or viola. Music containing “many a good tune”, brilliantly written for the instruments, providing ample opportunity for the display of virtuosity and “Spielfreude”.
- Played by The Italian Consort and Luigi Magistrelli, one of the foremost clarinet players of Italy. He made many recordings for Brilliant Classics with works by C.P.E. Bach (95307), Giuliani (95541), Kummer (94472), Archduke Rudolph (94952), Rebay (94171) and Fuchs (96305). ‘Luigi Magistrelli is a skilled artist, with the fingers and the enthusiasm for Weber.’ Gramophone.
More Less