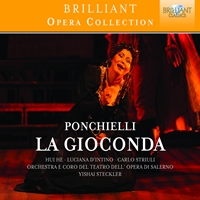 A masterpiece of Italian dramatic opera, La Gioconda is Amilcare Ponchielli’s finest work. Throughout the tragic tale of love, deception and revenge, Ponchielli’s score wonderfully weaves together tender intimacy and fierce power as the events unfold. Upon discovering that married woman Laura is having an affair with her former fiancé Enzo, manipulative Barnaba persuades the lovers to elope, with the hope of ensnaring Gioconda – who Barnada knows is in love with Enzo – for himself. Gioconda, learning of the planned elopement, sets out to murder her rival but is shocked to discover her mother’s rosary around Laura’s neck…

The opera boasts a wealth of inspired music, including such famous arias and duets as ‘Suicidio!’ and ‘E un anatema!… L'amo come il fulgor creato’ as well as the Dance of the Hours, one of the most popular ballet excerpts in the repertoire and which was even given the Disney treatment in the 1940 film Fantasia.

The recording is taken from Stagione Lirica’s 2012 season at the Teatro Verdi in Salerno, Italy. In the title role is acclaimed Chinese soprano Hui He, who has been enthralling audiences all over the world since her debut in 2003. Supporting her are Luciana D’Intino and Carlo Striuli, and the whole ensemble is directed by Yishai Steckler.

Other information:
- A brand new recording of a “Grand” romantic opera, La Gioconda by Ponchielli, recorded in 2012 at the Teatro Verdi, Salerno (Italy).
- La Gioconda is Ponchielli’s finest opera, containing powerful, sweeping romantic arias and ensembles, some of which gained immense popularity. The ballet music Dance of The Hours is considered “Music for the Millions” and features in Disney’s famous Fantasia film.
- Excellent cast with the exciting Hui He in the title role, and some of the finest young Italian voices of the moment.
- Booklet contains liner notes, synopsis and biographies.
- Sung texts available at www.brilliantclassics.com.
More Less