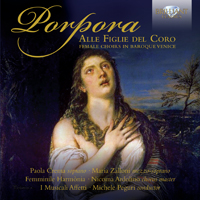 Vivaldi was not the only composer to write for the talented girls and women of the Ospedale della Pieta, the convent school in Venice which was apparently full of young musicians trained in vocal and instrumental virtuosity sufficient to tackle virtuoso sonatas and concertos. Nicola Porpora was born in Naples, and is known as a distinguished alumnus of the more operatically inclined Neapolitan school of composers such as Alessandro Scarlatti and Pergolesi.

Porpora worked off and on in Venice, and in 1742 became chorus master at the Ospedale della Pietà, and then from 1744 to 1747 worked in the same role at the Ospedale dei Poveri Derelitti run by the parish of S. Giovanni e Paolo. Most of the works on this CD – some of them recorded for the first time – date from this latter period. The choir was apparently in a parlous state when Porpora took it over, but he turned things around within fairly short order through rigorous daily rehearsals: as Porpora himself wrote on 4 January 1745, "To form a good choir calls for many things, the most important of which I shall describe here. […] resonant voices possessed by girls who are determined, ready to work hard, and skilled as instrumentalists."

The works here are multi-movement settings of psalms and other sacred texts, alternating arias and choruses, solo and ripieno texts, mostly lively in character except where pathos is called for in penitential texts. It makes a fine complement to the recent disc of secular cantatas on Brilliant Classics (BC94311) and is performed with native style by a historically ensemble based in Vicenza, just 60km from La Serenissma itself. The booklet contains a scholarly essay and the full sung texts are available for download at www.brilliantclassics.com.

Nicola Porpora (1686-1768) was an important composer, musician and teacher of Baroque Europe. He held several important posts, notably in Dresden, London (where he was Handel’s rival) and Venice. He was the teacher of the famous castrato Farinelli and Joseph Haydn.
In Venice Porpora was teacher and chorus master at the Ospedale delle Pietà, a charitable institution for orphans and abandoned girls, where music was an important part of the children’s education. On this disc are presented a selection of sacred works written for the female choirs of the Ospedale: highly attractive works, full of drama, expressive effects and virtuoso roles for both vocalists and instrumentalists.
Excellent performances by the Coro Femminile Harmonia and the Ensemble Barocca e Musicali Affetti, conducted by Michele Perugi.
A fascinating document of musical life in Baroque Venice, containing several first recordings!
More Less