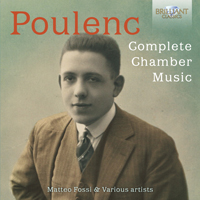 There are 20 separate works on this, the most complete set yet released of Poulenc’s chamber music. No single movement is more than a few minutes long and yet the sequence adds up to an absorbing narrative which takes us from the 20-year-old enfant terrible of 1920s Paris to the penultimate year of his life, with three masterfully written, unusually reflective wind sonatas. Like his older friend Satie, progenitor of Les Six, Poulenc tended to write music in short, repeated fragments. Unlike Satie, however, the younger man could and would switch moods – from clownish humour to lugubrious melancholy – at the drop of a hat.

Like his other compositional mentor Stravinsky, he composed at the piano, and his own fluency as a performer is evident from the piano parts of the many sonatas and trios in this collection. He much preferred wind instruments to solo strings, for their more personable qualities, though it helped that he had a wide circle of friends for whom to write such works.

Matteo Fossi is the animating spirit behind this comprehensive set. He also has a duet partnership with Marco Gaggini, which has made successful recordings of other 20th-century music for Brilliant Classics, including Bartók (BC94737) and arrangements of Schoenberg’s chamber symphonies (BC94957): ‘a very successful release,’ remarked MusicWeb of the Schoenberg CD. According to Gramophone’s review of the Bartók, ‘Matteo Fossi and Marco Gaggini play like a dream.’

With only one, full-price rival in the current catalogue, this new recording will make an attractive, indeed essential acquisition for all lovers of chamber music, of Poulenc’s ever-renewed idiom, of music that smiles, laughs and sympathises with your moods like a good friend.

The complete chamber music by Poulenc on 3 CDs!
Francis Poulenc is one of the most remarkable French composers of the 20th century. Inspired by many (Debussy, Satie, his fellow composers of the “Groupe des Six”) he found his essential own voice, an unique blend of French gaiety and a deep, serious and sometimes melancholic feeling.
These new recordings present Poulenc’s complete chamber music, written for a wide variety of instruments: violin, viola, cello, double-bass, flute, oboe, clarinet, trumpet, trombone, horn, bassoon, English horn and piano: a multi-coloured palette of sonorities, characters and emotions.
Italian pianist Matteo Fossi gathered an excellent line-up of instrumentalists/friends for this huge enterprise, and the result is a sheer delight, the feeling of a “labour of love” permeates every single performance, leaving the listener marveling about the originality and emotional impact of the music.
The booklet contains excellent liner notes written by a musicologist.
More Less