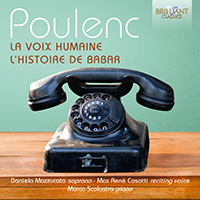 A unique coupling on record: new recordings of Poulenc’s moving telephone tragedy and his exquisite entertainment for children.

Words drew the best out of Poulenc. His songs, choral pieces and operas mould themselves to his carefully chosen texts with affecting simplicity and sensitivity to language and to the personalities of his singers. Among the most dedicated of his interpreters was the soprano Denise Duval, for whom Poulenc conceived La voix humaine in 1958 to a monodrama written by Jean Cocteau 30 years earlier and revised by the playwright for the lyric stage. Alone in her salon, a woman – unnamed – speaks to her former lover for the last time. She calls him, the line breaks, he replies, but we hear only her side of the story: anguished, pleading, honest, self-deceiving, unbearably touching.

Daniela Mazzucato made her La Scala debut in 1973, singing Susanna in Le
nozze di Figaro under the baton of Claudio Abbado. Since then she has appeared at the world’s great opera houses singing major soubrette and lyric-soprano roles such as Musetta opposite Mirella Freni; Oscar in Un ballo in maschera conducted again by Abbado and directed by Zeffirelli; and latterly musical theatre and character roles such as Miss Jessel in The Turn of the Screw and Marcellina in Figaro. To Poulenc’s lonely heroine she is well placed to bring both pathos and beauty.

No less touching in its way is the entertainment he devised for a group of bored children in 1940 during a summer holiday. They asked him to ‘play’ the much-loved story of Babar the Elephant, and Poulenc sat down at the piano and improvised an accompaniment to the story, soon working it up into a half-hour piece for reciter and piano. The story is told here by the experienced tenor Max René Cosotti, who worked with Glyndebourne Opera during the 1970s (including Ferrando in Cosi fan tutte) and has filled countless roles in Italian opera and operetta at distinguished opera houses throughout Italy.
More Less