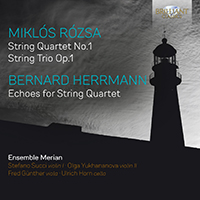 New recordings of little-known chamber music by two giants of Hollywood: the exciting debut on record of the Frankfurt-based ensemble merian.
While producing a string of hit scores for MGM such as the Oscar-winning Ben Hur, Miklós Rózsa (1907-1995) continued to add to his distinguished catalogue of works in classical forms, often writing in a more abstract and severe style than his late-Romantic music for the movies. Rózsa himself remarked that ‘in 1948, a new style began to appear in my Piano Sonata—more percussive, contrapuntal, aggressive. The String Quartet [No.1, 1950] continued in this vein. Maybe it was an inner protest against the excessive amount of conventional music I had had to write for conventional pictures.’
In terms of influence, the tone of the Quartet (dedicated to Peter Ustinov) is closer to his teacher Kodály than that of Bartók even in the driven second movement, though even the intense lyricism of the third movement scarcely contains an angry mood which is finally resolved by the exhilarating finale. The more conventionally Romantic strains of the String Trio date from Rózsa’s student days at the Leipzig Conservatoire in 1927, assimilating Brahms as well as the edgier work of his Hungarian elders. Breitkopf & Härtel published the work in 1929 as Op.1, but in 1974, the composer made major revisions to the original score, including numerous cuts, for its first recording.
The String Trio, as presented here, is the world premiere recording of the work as it was originally composed by. Breitkopf & Härtel published the work in 1929 as Op.1. In 1974, Rózsa made major cuts to the original score for its first recording. The ensemble merian presents the full, original version of the trio.
The album concludes in a quietly introspective vein with Echoes, the string quartet written late in life by Bernard Herrmann (1911-1975): one of a series of intimate, personal works akin to Richard Strauss’s ‘Indian Summer’ which produced Metamorphosen and the Four Last Songs. Evoking the muted textures of Debussy but the sombre mood of Shostakovich’s later quartet writing, the 10 continuous sections of Echoes nevertheless recall the flavour of Herrmann’s finest film music, especially the claustrophobic mood of Vertigo.
Comprised of seasoned players from Frankfurt's two full-time symphony orchestras, the Frankfurt Radio Symphony and the Frankfurt Opera Orchestra, ensemble merian was established for the purpose of recording of neglected classical works by composers more closely associated with motion pictures. The present release marks its debut album.

Miklós Rózsa and Bernard Herrmann were two composers leading a double life: Educated as serious classical composers who worked for the concert hall, they found their greatest success and life-long careers in the medium of motion pictures – more specifically, in Hollywood. Both men composed some of the most distinguished film scores of all time: Double Indemnity, Ivanhoe, Ben-Hur, King of Kings, El Cid (Rózsa); Citizen Kane, Vertigo, Psycho, and Taxi Driver (Herrmann).
Miklós Rózsa’s String Quartet and String Trio are vigorous and powerful works, rooted in the traditional German school around Max Reger, but also inspired by the rich folklore of his native Hungary (like his compatriot Bela Bartók).
Bernard Herrmann’s string quartet “Echoes” is cast in a single movement with ten identifiable sections. The work features several of Herrmann's stylistic obsessions, like the Valse triste and the fandango, prominently featured in many of the composer's film scores, expressing both pain and bittersweet nostalgia.
The “ensemble merian” was established for the purpose of this and possible future recordings. Comprised of seasoned players from Frankfurt's two full-time symphony orchestras, the Frankfurt Radio Symphony and the Frankfurt Opera Orchestra, “ensemble merian” is devoted to the recording of neglected classical works by composers more closely associated with motion pictures.
More Less