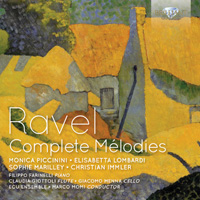 French composer Maurice Ravel may be well known for his instrumental music, in particular the orchestral work Boléro, but it is his vocal compositions that fully encapsulate the shimmering colours of early‐20th century music. Spanning an important period of Ravel’s career, from 1893 up to 1932, this release is an integral recording of Ravel’s songs, with both piano accompaniment and Ravel’s original scoring for ensemble. Many of the works reveal Ravel’s affinity with other cultures and his penchant for the exotic; from the Chansons madécasses, or ‘Madagascan songs’, to the Spanish‐themed Habanera (a tribute to his part‐Basque heritage) and the Cinq Mélodies populaires grecques, Ravel used the freedom of rarely‐explored cultures to throw off his usual restraint and employ new, exciting harmonies and musical innovations. His use of dissonances comes to the fore in this last work, particularly on the second and seventh notes. At other points, he experimented with bitonality, as in the Trois Poèmes de Stéphane Mallarmé, clearly influenced by Stravinsky and
Schoenberg, which reveal a new penchant for challenging conventional harmony. His careful scoring, however – Ravel saw the orchestration of his music as a task equally as demanding as composition – allows the delicacy of the music to shine through. This album contains all of Ravel’s vocal music, featuring four renowned singers supported by the Ensemble Contemporaneo dell’Umbria. Soprano Monica Piccinini, a major operatic performer who is debuting at La Scala later in 2015, is joined by mezzosopranos Elisabetta Lombardi and Sophie Marilley, both of whom have performed in opera houses across Europe, and German baritone Christian Immler, whose previous CD releases have been awarded the prestigious Diapason d’Or and Diapason Découverte.
An important and prestigious new recording: the complete songs (mélodies) by Ravel!
Ravel’s oeuvre is relatively small, and his songs form an essential part of it. Exquisite, refined, exotic, full of colouristic effects and unheard‐of timbres, they are a cornerstone of the 20th century song repertoire.
This new recording contains the complete songs, accompanied by piano or by instrumental ensemble.
Beautiful performances by 4 young singers: Monica Piccinini, Elisabetta Lombardi, Sophie Marilley and tenor Christian Immler. All of these vocalists are enjoying successful careers, singing in prestigious opera houses all over Europe. Christian Immler’s earlier recordings have won the prestigious Diapason d’Or.
Booklet contains extensive liner notes and artist biographies. The sung texts are available on www.brilliantclassics.com.