Rebay: Music for Viola and Guitar 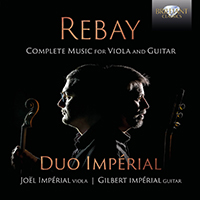 While Segovia's famous Paris recital of 7 April 1924 was no doubt a major turning point in 20th-century guitar music, inspiring composers like Albert Roussel, Georges Migot, Alexandre Tansman and many others, the city of Vienna was simultaneously the setting of a quieter, yet nonetheless important, revolution. What was likely the first ever conservatory programme for the guitar was inaugurated in 1923 at the Weiner Akademie under the tutelage of Jakob Ortner, and this class nurtured an interest in the classical guitar in composer Ferdinand Rebay (1880–1953) who served at the Weiner Akademie as a piano teacher from 1920–1944.
Born to a family from Lake Como, Rebay studied theory with Robert Fuchs and piano with Josef Hofmann. After first emerging as a composer of lieder (a genre that remained central to his compositional output), he was encouraged by Fuchs to write both chamber and symphonic instrumental music.
In an important 1926 article in the Österreichische Gitarre-Zeitschrift (a journal published by Ortner) Rebay boldly intervened in the debate over the languishing guitar repertoire: ‘I set out to write duets for individual wind instruments with guitar accompaniment, delighted to discover that the mixture of oboe or clarinet with the guitar sounds much more appealing than the mixture of these wind instruments with piano’. For the first time in the history of the guitar, a composer – not a guitarist! – had identified chamber rather than solo music as the most suitable means for the creation and promotion of the instrument’s identity. Loyal to this idea, between 1924 and the early 50s Rebay composed more than 600 pieces for guitar, many of them chamber works, thus entering the ranks of one of the instrument's most prolific composers.
An indomitable curiosity for experimenting with timbre would lead Rebay to pair the guitar with every instrument, leading to a corpus of music for viola and guitar that while small is nevertheless important for the rarity both of the combination and of 20th-century Viennese viola repertoire of any kind.
With this recording, Gilbert and Joël Impeìrial add a crucial piece to the process of discovery and appreciation of the music of this Viennese composer, in works that join the ranks of the most important recorded music for viola and guitar.

All works but the Sonata are world-premiere recordings!
Recorded in February of 2020 in Bernareggio, Italy
The bilingual booklet contains liner notes, in English and Italian, on the composer and works written by editor, researcher and classical guitarist Lorenzo Micheli
Ferdinand Rebay was active at one of the most fascinating periods of European music and taught by one of the most respected musicians of the time – Robert Fuchs, at the Vienna Conservatoire. Fuchs was both a composer and a pedagogue, and among his esteemed pupils were Mahler, Wolf, Sibelius, Zemlinsky and Schreker. Fuchs considered Rebay to be one of his best pupils, although the young composer found it impossible to flourish within the environment of the Second Viennese School and continued to work within the late Romantic idiom. Rebay turned to the guitar due to the influence of his friend Jacobus Ortner, Professor of Guitar at the conservatoire. Aware that the neglect of guitar repertoire for over half a century had led to a decline in the quality of writing for the instrument, Rebay set out to write complex, serious music that continued in the tradition of Giuliani and Sor.
This new recording contains the complete music for viola and guitar: The Sonata in D minor, Kleine moderne Tanz-Suite, Three Russian Folk Songs and the Lyrische Suite, beautifully played by the Duo Impérial: Joël Impérial (viola) and Gilbert Impérial (guitar).
More Less