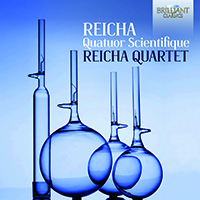 This release features a new recording of the seldom-performed work Quatuor Scientifique by Czech composer Anton Reicha. Reicha was born in 1770 and he is best known for his writings on music theory. His music is a fascinating insight into how his theories worked in practice and this release recognises the composer as a genius ahead of his time.

Reicha moved in musical circles throughout his life: he studied at the University of Bonn alongside Beethoven and was offered the chance to study under Joseph Haydn. Unlikehis contemporaries, Reicha broke with classical and baroque traditions and pushed radical new ideas about polytonality and polyrhythms, and he challenged the strict rules underpinning composition structures. For example in his modern interpretation of the fugue, he disregarded the rules which dictated that it must be in the dominant of the previous key and rather he declared the fugue as free to use any melody or key. Unsurprisingly, Reicha’s rule-breaking didn’t sit well with the sensibilities of the era and he counted Beethoven among his critics who commented ‘such fugues are no fugues’.

The controversy surrounding some of his works goes someway to explain why Reicha failed to achieve mainstream success in his lifetime. Nevertheless, he was a respected figure and in his later life he taught Franz Liszt, Hector Berlioz and César Franck, who would later weave his ideas into their own compositions. Many of Reicha’s works were unpublished when he died in 1836, including the Quatuor Scientifique, written while he lived in Vienna. The unpublished manuscript was shelved in a Parisian library and largely forgotten, until recently.

Quatuor Scientifique is the debut release from the Reicha Quartet, a pioneering ensemble dedicated to uncovering music and performance aesthetics of the 18th and 19th centuries. This new venture brings Reicha’s work necessary recognition and highlights his key role in shaping European musical tradition.

Czech composer Anton Reicha (1770-1836) was mainly known for his standard music theory writings, yet lately his compositional output is rediscovered. His wind quintets and his piano works receive their due recognition and his string quartets contain some strikingly original feats.
This new recording presents the first recording of the Quatuor Scientifique, a unique, 13-movement work in which the four movements of the standard string quartet are alternated by fugues (a “scientific” form according to Reicha), and with an introduction titled “La Pantomime”, in which the music describes certain mythological stories.
Excellent performance by the Reicha Quartet, a young Czech group specializing in the research and performance of forgotten works from the Age of Enlightenment.
The booklet contains extensive liner notes on the work, its origin and structure.
More Less