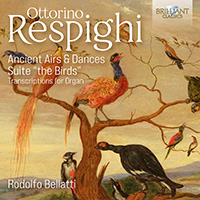 Though not strictly born in the 1880s (1879), Respighi belonged to a group of composers known as the generazione dell’ottanta (The 80s Generation), who strived to assert, as they saw it, a renewed musical expression of authentically Italian musical culture. It was a conservative stance in terms of both musical approach and nationalism, but it resulted in Respighi and colleagues recovering unjustly neglected treasures from their Italian heritage. Respighi’s first international success, an arrangement of Monteverdi’s Lamento d’Arianna, may be seen as the natural forerunner to the four suites of arrangements and transcriptions on this album.

While the intent may have been conservative, Respighi’s approach to what we now call ‘early music’ was notably liberal by our standards, marked as much by nostalgia and irony as erudition. Orchestration is much too weak a term to do justice to the process of subtle recomposition to which Respighi subjected his chosen originals.

Suite No.1 of the Ancient Airs & Dances consists of four pieces, yet Rodolfo Bellatti has moved its concluding Passo mezzo e Mascherada to the very end of the three suites in order to bring an authentically lively and upbeat close to the sequence as a whole. Many critics have singled out the Third Suite as the finest, perhaps because of its melancholy and reflective character.

Between composing the Second and Third of these Suites, Respighi produced another small masterpiece of affectionate neoclassicism with his Gli Uccelli (The Birds). Five avian-themed pieces of harpsichord and lute music supply Respighi with his originals, to which he gives a stylized gloss. Rodolfo Bellatti has made these Respighi transcriptions while bearing in mind their suitability for organs of different ages, styles and sizes. He has aimed to respect both the colours and form of Respighi’s suites as well as the nature of the original pieces with their older tuning systems and affective idiom. He has also chosen to confine himself to the range of pitches afforded by organs of the 16th and 17th centuries.

Ottorino Respighi (1879-1936) is one of the most important Italian composers of the first half of the 20th century. Famous for his sumptuous symphonic works (notably the Roman Trilogy) he had a fascination for the Italian Renaissance and Baroque, transcribing works by the old masters and using their modal techniques.
The Ancient Airs and Dances “Antiche danze ed arie” and the orchestral suite “Gli Uccelli” (The Birds) are adaptations of Renaissance and Baroque dances and arias by Italian composers, brilliantly orchestrated by Respighi. Organist Rodolfo Bellatti was inspired by Respighi’s orchestrations and strove to create a similar effect on the organ, with its endless possibilities for coloring and tonal differentiations. The result is spectacular and presented on this new recording, which is recorded on the magnificent Serassi and Grisanti Organs at the Cathedral of Santa Maria Assunta, Asti, Italy, the specifications of which are included in the booklet.
Rodolfo Bellatti is an active recitalist and recording artist, with several albums to his credit, as well as a researcher in the areas of organ building and musicology.


Other information:
Recorded July 2020 in Asti
Booklet in English contains liner notes by musicologist Peter Quantrill on the composer and works, along with the artist’s biography and organ profiles and stop-lists
More Less