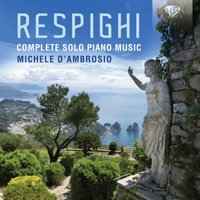 Acclaimed composer, violinist and musicologist, Ottorino Respighi has been remembered mostly for his vivid and skilful orchestral writing. Little known are his many fine piano works (he also worked frequently as an accompanist for singers and soloists), which include arrangements of his own and original works for the instrument.

Works such as Antiche danze ed arie per liuto and Tre preludi su melodie gregoriane betray Respighi’s fascination with ancient music. Active as an arranger and transcriber during the latter half of his life, both works are arranged from their original orchestral versions (selections from Antiche danze suites I & III and Vetrate di Chiesa P150 respectively), and retain the vivacity, colour and poignancy of the originals, whilst showcasing Respighi’s dexterous writing for piano. Other pieces find Respighi in
more familiar romantic territory: the Sei pezzi’s characterful six movements – including the gorgeous Nocturne – display his mastery of old musical forms and an uncanny ability to dress them in 19th-century musical language, with smatterings of Debussy and Schumann throughout. Schumann’s influence is present also in the Sonata in F minor, with decidedly more tempestuous writing, and demonstrates Respighi’s ability to write clarity and emotional depth into his music. Much of Respighi’s early work is under-represented, and pianist Michele D’Ambrosio brings these surprising and powerful works to life with a rare display of Respighi’s precocious talent. Largely written whilst still a student, the Sonata in A minor and Andante in F show the early influence of Schubert, whilst the Suite shows inspiration from Tchaikovsky.

Many of these works are newly discovered and, having also recorded the entire piano works of Alfredo Casella, D’Ambrosio
brings his dedication to cataloguing these rare and under-performed works along with technical prowess and interpretive imagination.

Ottorino Respighi (1879-1936) is widely considered as one of the most important and successful Italian composers of the first half of the 20th century. His sumptuous, large scale orchestral works, like Pini di Roma and Fontane di Roma gained him world fame as a symphonist, colourist and innovative orchestrator. It is less known that he wrote a substantial oeuvre for piano solo.
This 2 CD set contains the complete works for piano solo by Respighi. His two Piano Sonatas reveal a promising youth still under the influence of Schumann and Chopin, his 6 Pieces show his individual style: picturesque, charming and colourful. Also included are the piano solo version of the famous “ Ancient Dances and Airs for the lute” and the “3 Preludes” which were later successfully orchestrated by the composer under the title “Vetrate di Chiesa” (Church Windows).
Excellent performances by Italian pianist Michele D’Ambrosio, who already recorded for Brilliant Classics the complete piano works by Alfredo Casella, which was hailed enthousiastically by the press, resulting in several 5 Star reviews.

Contains extensive liner notes on the history of the works.
Recorded in Italy in July 2014.
More Less