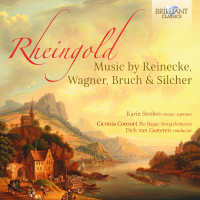 Previous Brilliant Classics albums by this Dutch string orchestra, based in The Hague, have focused on late-Romantic ‘American Pioneers’ (96086) and composers in early 20th-century Paris (95734). Under their founder-director Dick van Gasteren, they now turn to the rich history of Rhineland music from the high-point of its immortalisation in operatic culture as the bedrock of Wagner’s Ring cycle.
Das Rheingold itself is present by implication in the cycle of Wesendonck-Lieder which Wagner composed on the shore of Lake Zurich, initially as sketches for Tristan und Isolde, which he had embarked upon as a venture to drum up interest and capital for the larger project of the Ring. Inspired by his intimate association with as well as the poetry of Mathilde Wesendonck, the wife of a wealthy silk merchant who was underwriting the composer’s sojourn in Zurich, Wagner then developed the songs into a self-contained cycle which throbs with transfigured desire much like the opera.
The cycle is sung here by the mezzo-soprano Karin Strobos, whose career was launched by singing Octavian in Der Rosenkavalier at the Netherlands Opera under Sir Simon Rattle. She also sings the album’s notable rarity: a setting of Heine’s Loreley text, which describes the mythical creatures who lure unsuspecting Rhenish sailors to their doom like Greek Sirens. Originally composed as a male-voice partsong by Friedrich Silcher (1798-1860), the song has been transcribed by Dick van Gasteren for Strobos and La Ciconia.
Complementing the songs are two unfamiliar but attractive examples of late-Romantic German string music: the Serenade Op.242 by Carl Reinecke, and the Concerto for String Orchestra by Max Bruch. Neither work enjoys more than a toehold on the record catalogue, and this engagingly vivid new recording makes the most persuasive case for them.

Critical praise for the Ciconia Consort on Brilliant Classics
‘The Ciconia Consort does Castérède proud, dispatching the counterpoint in the finale with relish… I enjoyed this disc greatly.’ Fanfare (French Music)
‘The Ciconia Consort, resident at the Hague, are a fine ensemble, and this collection will not disappoint.’ MusicWeb International (American Pioneers)

- The Rhine is the inspiration source to many romantic and folkloric works of music
during the nineteenth century. Carl Reinecke, Richard Wagner and Max Bruch
wrote, in their own romantic idiom, compositions about the Rhine. They shared a
great affinity for the high romance of fairy tales, sagas, knight stories, folk music and
mythology (including mythology of the Rhine); and were the musical
equivalent to the stories of the Brothers Grimm, Hans Christian Andersen, or the
medieval Nibelungenlied. The title of this CD has been chosen in honor of the
composer whose lifework, Der Ring des Nibelungen, is dedicated to the gold of the
Rhine.
- Presented on this new recordings are the Wesendonck-Lieder by Richard Wagner, the Serenade for Strings by Carl Reinecke, the Concerto for String Orchestra (Octet) by Max Bruch and Die Loreley by Friedrich Silcher.
- This recording is the third CD on Brilliant Classics of the Ciconia Consort, a Dutch string orchestra conducted by Dick van Gasteren, an internationally active conductor, who was Bernard Haitink’s assistant during the Mahler Festival Amsterdam in 1995. Their first CD for Brilliant Classics contained French music for string orchestra, and was met with enthusiastic critical acclaim, as was their CD “American Pioneers” with works by Antheil, Copland, Ives and Foote.
More Less